Baba Baidyanath Temple | Story and Legends | How to Travel | FAQs

Vaidyanatha Jyotirlinga Temple, also known as Baba Baidyanath Dham and Baidyanath Dham, is one of Shiva's twelve Jyotirlingas. It is situated in Deoghar, in the Santhal Parganas division of the Indian state of Jharkhand. It is a temple complex that includes Baba Baidyanath's main temple, where the Jyotirlinga is installed, as well as 21 other temples. According to Hindu mythology, the demon king Ravana worshipped Shiva at the current location of the temple in order to obtain the boons that he later used to wreak havoc on the world. Ravana sacrificed his ten heads to Shiva one after the other. Shiva was pleased with this and descended to heal Ravana's injury. He is known as Vaidhya because he worked as a doctor ("doctor"). This aspect of Shiva inspired the temple's name. 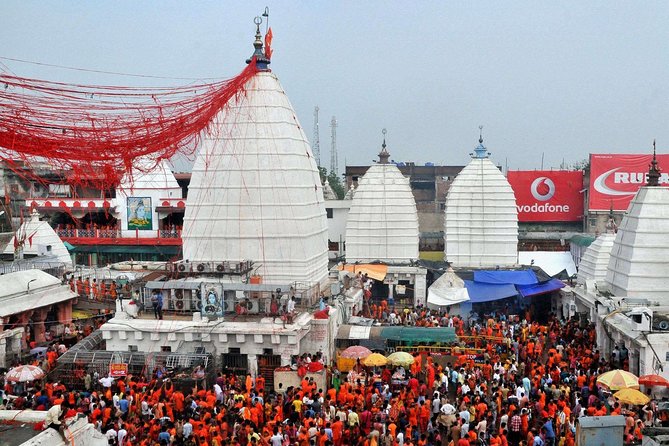 According to this, Vaidyanath jyotirlinga is located in the North-Eastern part of the country at Prajwalika nidhanam (meaning funeral place, i.e., chithabhoomi). Deoghar is located in the country's east. Chidabhoomi also indicates that this was a funeral site in the past, where corpses were burned and post-death ceremonies were held. This location could have been a centre of tantric cults such as Kapalika/Bhairava, where Lord Shiva is revered as smasan vasin (meaning "living in a crematorium") and sava bhasma bhushita (meaning, smearing body with ashes of burnt bodies).

The three temples claiming to have the real' Vaidyanath jyotirlinga are:

It is believed that Shiva first manifested himself as a Jyotirlinga on the night of the Aridra Nakshatra, hence the Jyotirlinga's special reverence. The same Vaidyanath shrine is considered one of 51 Shakti Peethas, where the 'heart' of Sati (goddess) fell, after being broken apart by Lord Vishnu's Sudarshana Chakra from the body of Dakshayani (Sati), carried by the lovelorn, distraught Shiva, at the location on which the respective temple is built. Because Sati's heart fell here, the location is also known as Hardapeetha. Sati is referred to as Jayaa Durga (Victorious Durga) and Lord Bhairava is referred to as Vaidyanath or Baidyanath. Dakshayani reincarnated as Parvati, the daughter of Himaavat, the mountain king, and his wife, the Devi Mena.

Legend of the Jyotirlingas:

According to Shiv Mahapuran, formerly upon a time, Brahma( the Hindu God of creation) and Vishnu( the Hindu God of preservation) argued over the supremacy of creation. To put them to the test, Shiva pierced the three worlds as a massive, noway-ending pillar of light known as the jyotirlinga. To find the end of the light in either direction, Vishnu and Brahma resolve their paths down and above, singly. Brahma fabricated about having discovered the end, while Vishnu admitted defeat. Shiva appeared as the alternate pillar of light and cursed Brahma, telling him that he would have no place in observances while Vishnu would be worshipped ever. The highest partless reality, from which Shiva manifests in part, is known as the jyotirlinga. Thus, the jyotirlinga sanctuaries are locales where Shiva appeared as a fiery column of light.

Originally, there were allowed to be 64 jyotirlingas, with 12 of them considered extremely auspicious and holy. Each of the twelve jyotirlinga spots is named after the presiding deity, who is allowed to be a different manifestation of Shiva. The primary image at all of these spots is a lingam representing the beginningless and endless Stambha pillar, representing Shiva's bottomless nature.

The story of Baba Baidyanath Dham:

The Baidyanath temple story takes us back to the Treta Yuga. Ravana, the King of Lanka, was a great devotee of Lord Shiva, according to popular Hindu belief. He once felt that unless Lord Shiva decides to stay there forever, his capital would be incomplete and under constant threat of enemies. So he travelled to the Himalayas to impress the Lord and began offering his heads one by one. 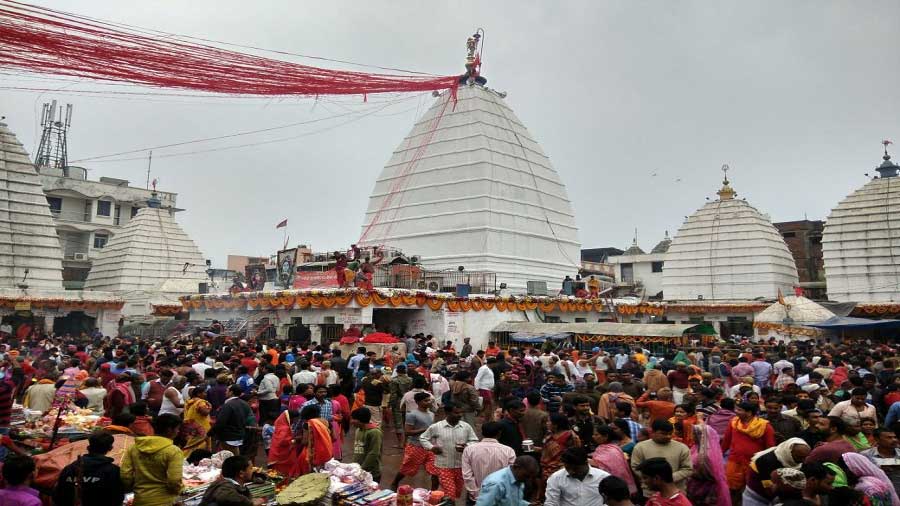 Lord Shiva descended on Earth, impressed by his devotee, as he was about to cut off his tenth head. He then healed Ravana and bestowed a boon on him. Ravana asked Lord Shiva if he could bring the Shivalinga back to Lanka with him, and the Lord agreed with one condition. Lord Shiva warned Ravana that if he keeps the Shivalinga on the ground until he arrives in Lanka, it will become fixed to the ground and he will never be able to uproot it. Ravana agreed to the terms and set out on his journey.

The other Gods and Goddesses were not pleased with the decision because they knew that if Shiva went to Lanka with Ravana, he would become invincible and his evil deeds would endanger the world. They approached Lord Vishnu and requested that he prevent Ravana, the demon king, from taking the Shivalinga to Lanka. Lord Vishnu requested that Lord Varun, the Ocean God, enter Ravana's stomach when he performs Aachamanam during the Sandhya Vandana, the evening prayer. Aachamanam is a purification process that involves sipping drops of water while reciting Vishnu's 21 names.

It was almost evening when Ravana arrived in Deoghar, so he decided to perform his evening prayers. Lord Varun entered his stomach during the Aachamanam, as requested, and Ravana felt an urgent need to release himself. He gave the Shivalinga to a milkman and asked him to look after it until he returned. Surprisingly, the more Ravana released himself, the stronger the urge became. He took a long time to return, which irritated the impatient milkman who kept the shiva linga on the ground and left. When Ravana returned, he discovered the Shivalinga had been fixed to the ground. He made numerous attempts to uproot it but failed miserably. Ravana's actions harmed the Shivalinga. He realised the milkman was Lord Vishnu, who had pranked him, and stormed out. Later, God and Goddess descended from heaven and built the Shivalinga. The temple complex contains a pond, which is thought to be where Ravana was released. It is said that because Lord Shiva cured Ravana and served as a doctor, he is known as 'Vaidhya,' a Sanskrit word that means 'physician,' and this is how the temple got its name.

Also, because Shiva granted Ravana's wish, the Shiva linga is known as the 'Kamana Linga,' as Kamana means 'Desire.'

The entrance, the centre section, and the main temple are the three sections that make up the temple. The lotus-shaped structure stands 72 feet tall and faces east. The Maharaja of Gidhaur, Raja Puran Singh, gave three gold vessels that are displayed on top of the shrine. In addition to the vessels, there is a "Punchsula," which is an eight-petaled lotus jewel known as Chandrakanta Mani, and a set of five knives in the shape of a trident. The Shivalingam is fractured at the top and measures around 5 inches in circumference and 4 inches in height. Apart from the primary Shiva temple, there are a total of 21 temples within the complex, each one honouring a different deity: Maa Parvathi, Maa Kali, Maa Jagat Janani, Kal Bhairav, and Lakshminarayan. 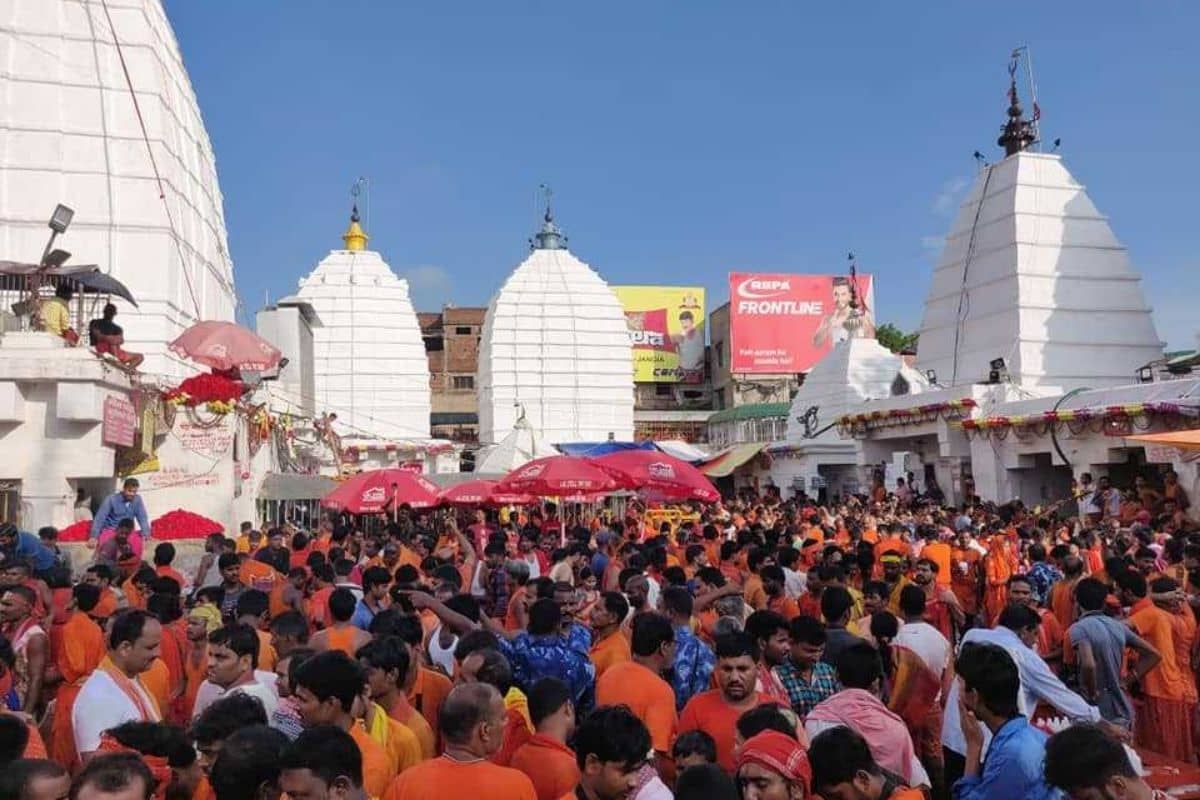 Who built and when did Baidyanath Temple get built?

It is thought that Lord Vishwakarma, the celestial architect, built the Baidyanath temple. According to legend, Puran Mal, the Maharaja of Giddhour's ancestor, constructed some of the temple's frontal features around 1596. The temple's creator's identity, however, is unknown.

The mandir opens at 4 AM and closes at 4 PM

Masik Shivratri in the month of Margashirsha coincides with Krishna Chaturdashi in November. Every month, for a set period of time, the festival is held across India. Lord Shiva devotees follow strict rituals with various beliefs attached to them. They fast and make charitable contributions to the poor and needy. This day is observed by both married and unmarried women in order to find a suitable partner for themselves.

Lord Shiva's spiritual significance has a special feeling that devotees who observe can understand. According to India's spiritual calendar, the Masik Shivaratri festival, which occurs every month of the year, is significant. The day is celebrated every month, whereas Mahashivratri occurs only once a year. Masik Shivratri fasting aids spinsters in finding desired partners. The day not only helps devotees control their senses, but it also helps them control malevolent emotions such as anger, jealousy, pride, and greed.

You can offer Masik Shivratri at Baidyanath Temple on Utsav App! 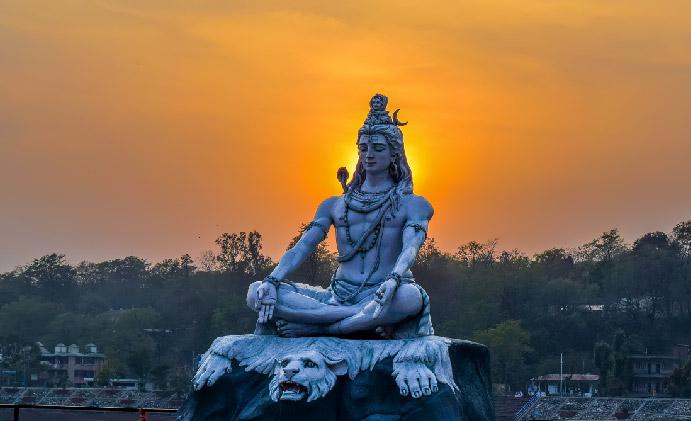 How Do I Travel By Train To Baidyanath Temple?

Take a train to Jasidih Junction (Station Code: JSME), which is the closest railway junction to Baidyanath Temple and has good train connections to all of India's major cities.
See the list of trains that go to Jasidih from New Delhi, Mumbai, and Kolkata. Transport a DMU train from Jasidih to Baidyanath Railway Station (Station Code: BDME) after arriving there. Alternatively, you can arrange for a cab or an auto to take you there. Buses are also an option. Baba Badiyanath Temple is 8 KM away from Jasidih, which can be easily travelled in 30 minutes.

Birsa Munda Airport in Ranchi, which is 253 KM away, is the closest airport to Baba Baidyanath Dham.