The word Mahalaya is derived from the Sanskrit word Mahalaya. When segregated, the word “Maha” signifies great or big and “Alaya” signifies abode or residence. Putting together it means the residence or abode of great individuals who are not ordinary in nature. 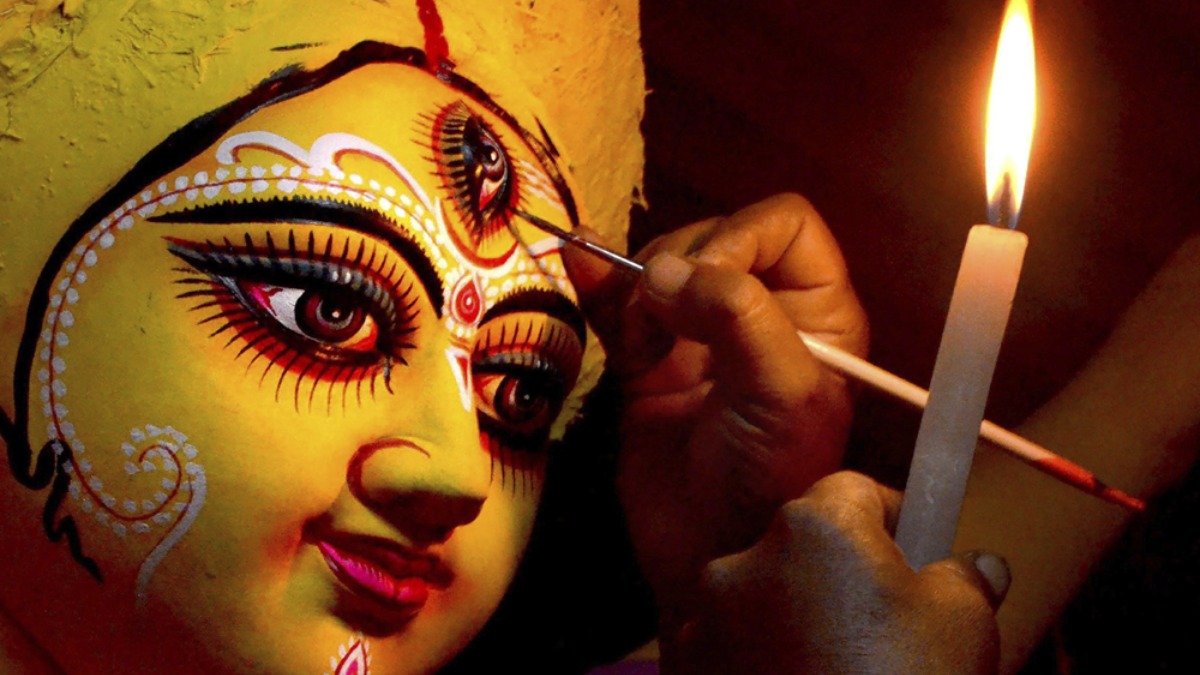 Who is Durga mata / Durga Maa?

Durga Mata / Durga maa is an Indian mythological based Goddess created after Mahishasura attacked the Gods. Eventually, the Gods lost the war due to the blessing(vardaan) received. Durga maa is also known to be one of the consort manifestations such s Uma, Sati, Parvati, Durga and Kali. 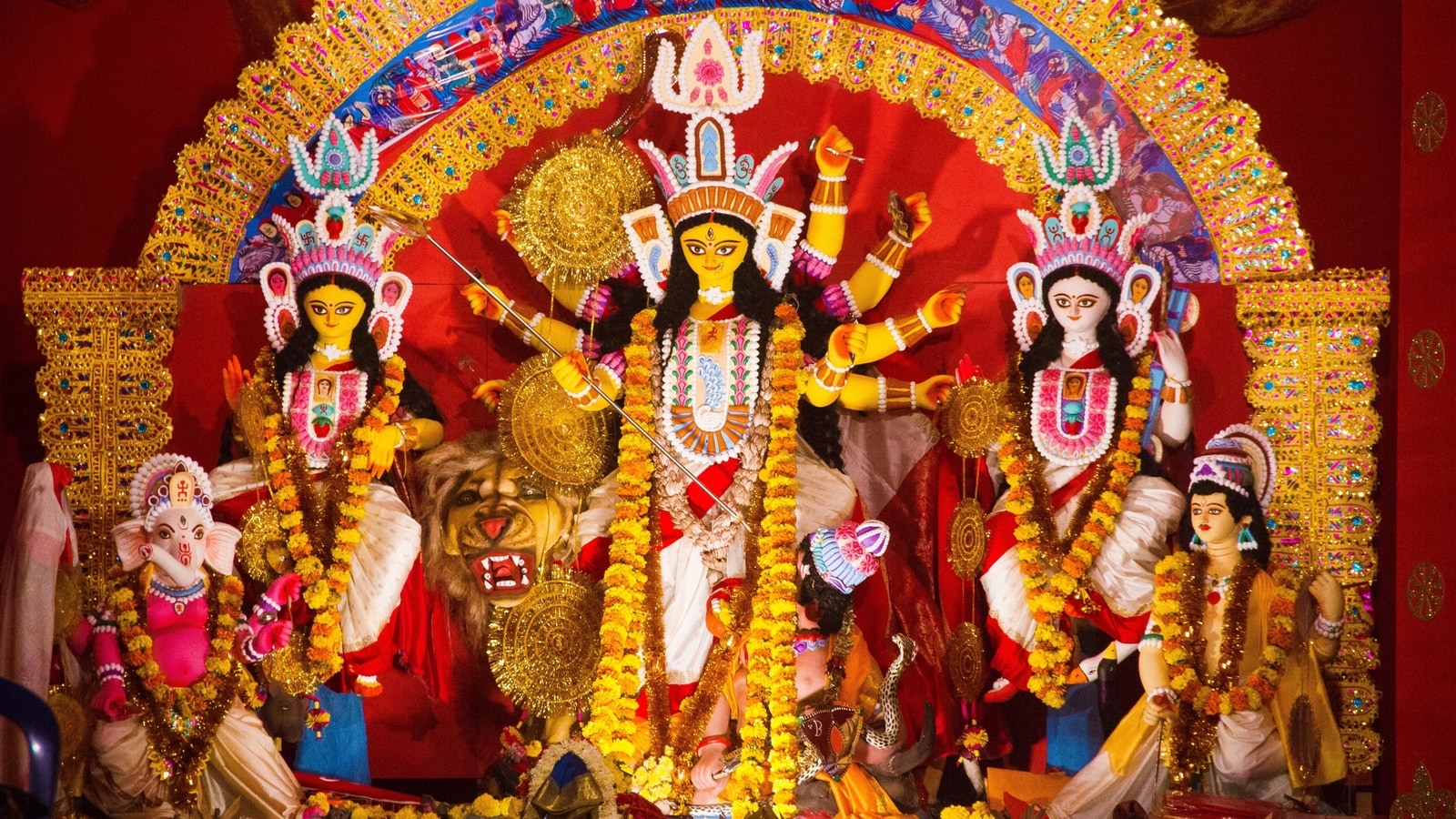 It was after the Gods worshipped Lord Shiva (Adi Shakti) to save them from the demon, Durga Maa was created by embodying the collective energies (Shakti) of Brahma, Vishnu and Maheshwar to kill the demon Mahishasura since no other existing God had the competency to kill the demon. The fight between Goddess Durga and Mahishasura lasted for nine (9) days, followed by the death of the demon on the tenth (10th) day by the iconic Trishul / trident given to her by Agni Dev.

To sum it up, Goddess Durga is more powerful than any other Individual God who created her.

The festival of Durga Puja begins with Mahalaya. The goddess Durga is said to have descended to Earth on this day. This concludes 'Pitri Paksha,' a 16-day period during which Hindus pay reverence to their ancestors. Hindus commemorate the end of 'Pitri Paksha' with tarpan, a traditional offering to their departed relatives or ancestors. The ceremony is carried out by taking a holy plunge in the Ganges or other bodies of water and praying in memory of their forebears.

Mahalaya is distinguished for enormous, intricately made Durga statues displayed in households and atop ornate podiums known as Pandals. On this day, sculptors who have created the goddess Durga from clay lumps begin painting her eyes. In Bengal, this is known as 'Chakkhudaan.' True to protocol, the Goddess is summoned and aroused with a prayer to open her eyes with 'Chakkhudaan.'

A few days later, the idols were loaded onto trucks and transported from the studios to their final resting place at gilded and wonderfully made Puja pandals.

Is Durga Puja and Navratri same?

Navratri is observed for nine (9) days dedicating the nine avatars of Durga maa whereas Durga puja is celebrated widely in the north, east and northeastern places for ten (10) days. Navratri starts with worshipping Shailputri (The first avatar of Goddess Durga) whereas Durga Puja starts with Mahalaya. Navratri ends with the occasion of the celebration of the victory of Lord Ram over Ravana whereas Durga puja ends with the victory of Goddess Durga over Mahishasura. It is often said that during Durga Puja - While India fasts, Bengalis feasts. With this, we can easily decode the fact that during Navratri devotees do not consume any non-veg food whereas the same does not apply to the Bengalis.

Significance and resemblance of Durga Maa:

Durga Maa signifies an idol of valour and strength along with determination, motherhood, wisdom, destruction, wars and punishment to a cosmic level. She is feared by the evils like Mahishasura.

She usually rides a lion with her sons and daughters namely, Ganesh(the initiator), Karthik(the protector), Saraswati(the knowledgeable) and Laxmi(the provider), beside her during Durga Puja celebration, which is one of the biggest festivals in the north, east and northeast.

With ten (10) hands holding different weapons and holistic items. They are:

Out of the weapons Durga maa holds, Vajra was given by Lord Indra, Conch by Lord Varuna, Trishul by Agni Dev, Bow and arrows by Vayu dev, and Vishwakarma gave the armour and the axe.

When is Mahalaya celebrated?

Mahalaya is celebrated at the end of Pitra paksha(also known as Sarva pitra Amavasya) and the beginning of Devi paksha. Pitra paksha means the people of the past generations, therefore during the sixteen (16) days of celebration of pitra paksha, people pay homage to ancestors and on the last day of it, they chant prayers/tarpan / Shraddha in remembrance of the deceased forefathers and ancestors. Taking a bath in Ganga can be a bonus.

How to do Tarpan on Mahalaya?

Prayers / Shraddha / Tarpan on Mahalaya for the ancestors must be done facing the south direction and for Sages and Gods, it should be done facing the east direction. During the ritual make sure to chant the names clearly along with offerings of auspicious items such as milk, water, black sesame, flowers, sweets or other foods.

How is Mahalaya celebrated?

Mahalaya is mostly and widely celebrated by Bengalis. It is more of a special spiritual ritual as it signifies the end of evil is near as the invocation of Durga maa starts. Bengalis on this day wake up early in the morning (mostly around 4 o’ clock) and tune to the Mahishasur Mardini which is a compressed version of the actual story of the fight between Goddess Durga and Mahishasura, recited by Birendra Krishna Bhadra.

The real Mahishasur Mardini is a one and half hour montage of chandipaath recitation from Sri Sri Chandi or Durga Saptashati.

What to eat during Mahalaya?

It is an Amavasya morning which commemorates the beginning of Mahalaya, therefore keeping the Amavasya in mind it is often suggested to consume/eat satvik or veg food. Strictly avoid alcohol and non-vegetarian foods as consumption of these may lead to a negative effect on your horoscope.

When was Mahalaya first celebrated / Who started Mahalaya?

Around the year 1931, the famous Mahishasur Mardini of Mahalaya celebration was broadcasted over the radio station of Akashvani, Calcutta, organised by Pankaj Kumar Mallik, Premankur Aatorthi, Nripendra Krishna Mukhopadhyay, Raichand Borai and recited by Birendra Krishna Bhadra. It was since then Mahishasur Mardini is broadcasted as an important and special celebration on All India Radio(AIR) in the form of Hindi translation and in Bengali(original) in West Bengal, northeast and some part of regions having a wide Bengali population.

Later the celebration of Mahalaya started to be broadcasted as a live performance in its pre-recorded format since 1966.

Around 1976 a renowned and famous actor named Uttam Kumar was employed for the remake of the celebration with his own audio, followed by its renaming as Durga Durgatiharini but it could never match up to the level of work done by Birendra Krishna Bhadra and hence the reversion to the original work did not take much time.
The entire team of artists behind the original work of Mahishasur Mardini:

How to see Mahalaya?

Since the first original work of Mahishasur Mardini of Mahalaya has made its way into the hearts of the people, the work has never taken a back step in the terms of interest and is still and will always be an evergreen work by Birendra Krishna Bhadra.

To listen or watch Mahalaya live on the day of Mahalaya, tune into either of the channels mentioned below:

The entire Mahalaya lyrics both in English and Bengali can be found here.
(Click here for lyrics)

The entire Mahishasur Mardini by Birendra Krishna Bhadra of Mahalaya in Bengali with caption in English presented and brought to you by the reputed and one and only Saregama Bengali can be found here:
(Click here for video )

It is often believed that listening to just Mahishasur Mardini or the story of mahalaya itself is a holistic thing. Therefore, if you are an animation fan or a parent who wants to incorporate interest into your child regarding it, an animated story might be a perfect fit.

If you are excited to share with your family and friends regarding Mahalaya and its auspiciousness, here are some quotes and wishes you can send and make them smile with:

2. May Maa Durga’s blessings remove all hurdles from your life as she removes the darkness from the world on this very auspicious day.

3. May this Mahalaya and Durga Puja bring joy and prosperity to all aspects of your life! Shubho Mahalaya

5. May this festive season brighten your days and nights,

May it add colour and make your life more bright,

May it remove all worries from your life, and give you the strength and power to face every hurdle with confidence.

6. With the blessings of Goddess Durga on this auspicious day, may you achieve success in all your future endeavours. Shubho Mahalaya to you and your beloved family!

7. May all your miseries and difficulties come to an end, and you have a lovely and amazing life ahead. Happy Mahalaya!

8. Mahalaya and Durga Puja infuse our hearts and minds with positivity and zeal to keep moving ahead with happiness. Shubho Mahalaya!