Shani Jayanti is marked as birth anniversary of Lord Shani. Shani Amavasya is another name for Shani Jayanti. Lord Suryadev's son, Lord Shani, oversees the planet Saturn and the weekday Saturday. According to the North Indian Purnimant calendar, Shani Jayanti falls on Amavasya Tithi in the month of Jyeshtha. Shani Jayanti happens on Amavasya Tithi during Vaishakha month, according to the South Indian Amavasyant calendar. Shani Jayanti happens on the same day in both types of calendars, although the name of the lunar month changes. Shani Dev is worshipped by devotees on Saturdays (Shaniwar), a day devoted to him, to seek his blessings and to counteract negative consequences. 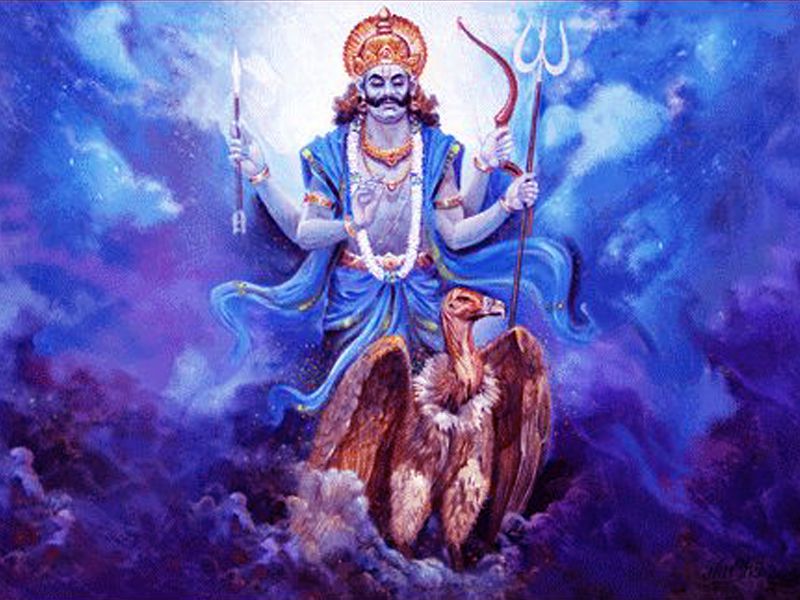 Shani Jayanti, also known as Shani Amavasya, will be commemorated on May 30 this year.

Shani Dev is the son of Lord Surya and Devi Chaaya, the shadow of Lord Surya's wife, Devi Saranyu, according to Hindu literature. Devi Sarnyu is reported to have fled Lord Surya because he was too hot and dazzling for her. She went gone for Penance, leaving her Shadow Chaaya in charge. Shani Dev was born black because he was born during the period when Devi Chaaya was meditating Lord Shiva in intense penance. Lord Surya used to taunt Chaaya because of Lord Shani's dark skin, which made him distrust her fidelity.

Lord Shani, enraged by Lord Surya's taunts, is supposed to have cast a scathing stare on him, causing him to be burned and his skin to turn black. Lord Shiva cured Lord Surya at that moment and revealed the truth of Chaaya and Lord Shani's birth. Lord Shiva also bestowed immense powers and authority to Lord Shani, allowing him to punish mankind for their wrongdoings.

Lord Shani is the planet Saturn's and Saturday's god. According to celestial motions, Saturn is the planet that moves the slowest. As a result, the position of this planet in an individual's birth chart has significant astrological importance. Saturn is commonly seen as a planet that has a negative impact on people's life, and so it is feared.

But the truth is that this sluggish planet is Karma's home. Only those who have gone through penance, suffering, and difficulty and made hard, disciplined, and honest efforts in their lives would be successful. The acts done in the previous and current life determine whether an individual will be fortunate or suffer from bad luck.

It is said that everyone goes through a Shani Sade Sati phase once in their lives, during which they face the most difficult challenges of their lives. If your acts are excellent, however, Lord Shani will offer his blessings on you during this time, assisting you in achieving prosperity and releasing you from such suffering and difficulty.

As a result, Hindus worship Lord Shani and give prayers to him in order to appease him and lessen his negative consequences. People who are dealing with Sade Sati should worship to the deity on a daily basis. Devotees are showered with good fortune by fasting on Shani Jayanti and visiting Lord Shani's shrines.

To placate Lord Shani, Hawan, Homam, and Yagya should be performed on Shani Jayanti. The most important rites done during Shani Jayanti are Shani Tailabhishekam and Shani Shanti Puja. They are conducted to reduce the influence of Shani Dosha, also known as Sade Sati, in the horoscope.

Devotees undertake a special Puja ritual, Yajna, or Homa on Shani Jayanti, which is generally held in Shani temples or Navagraha temples. The worshippers clean the place of worship as well as the deity's statue before beginning the procedures. Water, oil, panchamrit, and Gangajal are used to clean.

The idol is then decked with a neckpiece made out of nine valuable stones called as Navratna Haar, and puja begins. Devotees recite Shani Path or Shani Strotra in order to satisfy the Lord and achieve prosperity in life.

On Shani Jayanti, devotees are also asked to donate mustard oil, sesame seeds, and black coloured clothing in order to enjoy a life free of impediments and barriers. People also keep a rigorous fast and feed animals, particularly cows and black dogs. Some devotees visit Shani Temples to give oil and black til seeds after reciting Shani Dev Mantras 11000 times.