The festival of Kartik Poornima, also known as the "Festival of Lights of the Gods," or Dev Deepavali, is observed in Varanasi, Uttar Pradesh, India. It occurs fifteen days after Diwali on the full moon of the Hindu month of Kartika (November–December). More than a million earthen lamps (diyas) are lit in honour of Ganga, the Ganges and its presiding goddess, on the steps of each ghat along the Ganges River's riverside, from Ravidas Ghat at the southern end to Rajghat. On this day, according to legend, the gods come to Earth to take a bath in the Ganges. The gods are reputed to visit Earth on this day and take a bath in the Ganges, according to historical accounts. As Tripura Purnima Snan, the event is also celebrated. In 1991, Pandit Kishori Raman Dubey (Babu Maharaj) inaugurated the custom of burning lamps on the day of the Dev Deepawali festival at the Dashashwamedh Ghat. Dev Deepawali 2022: Dev Deepawali marks Lord Shiva's victory over the demon Tripurasura. This year, Kartik Purnima falls on the day of the Lunar Eclipse. 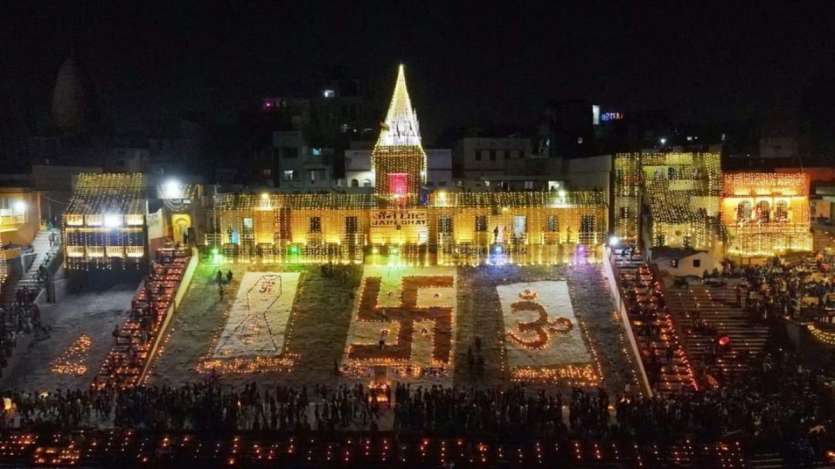 According to Hindu mythology, the demon Tarakasura had three sons who were collectively known as Tripurasura: Tarakaksha, Vidyunmali, and Kamalaksha. Tripurasura pleased Lord Brahma with their great penance and pleaded for immortality. However, Lord Brahma bestowed upon them the blessing of being destroyed by a single arrow only. Tripurasura unleashed chaos and wreaked massive destruction after gaining the blessings. They were all slain by a single arrow when Lord Shiva, in the form of Tripurari or Tripurantaka, defeated them.Due to Lord Shiva's victory over the demon Tripurasura, Gods designated this day as Deepavali/Diwali and so the celebration is known as Dev Deepawali. Hindus get up early on Dev Diwali to bathe in the sacred Ganges, light diyas in the evening and offer prayers to Lord Shiva. 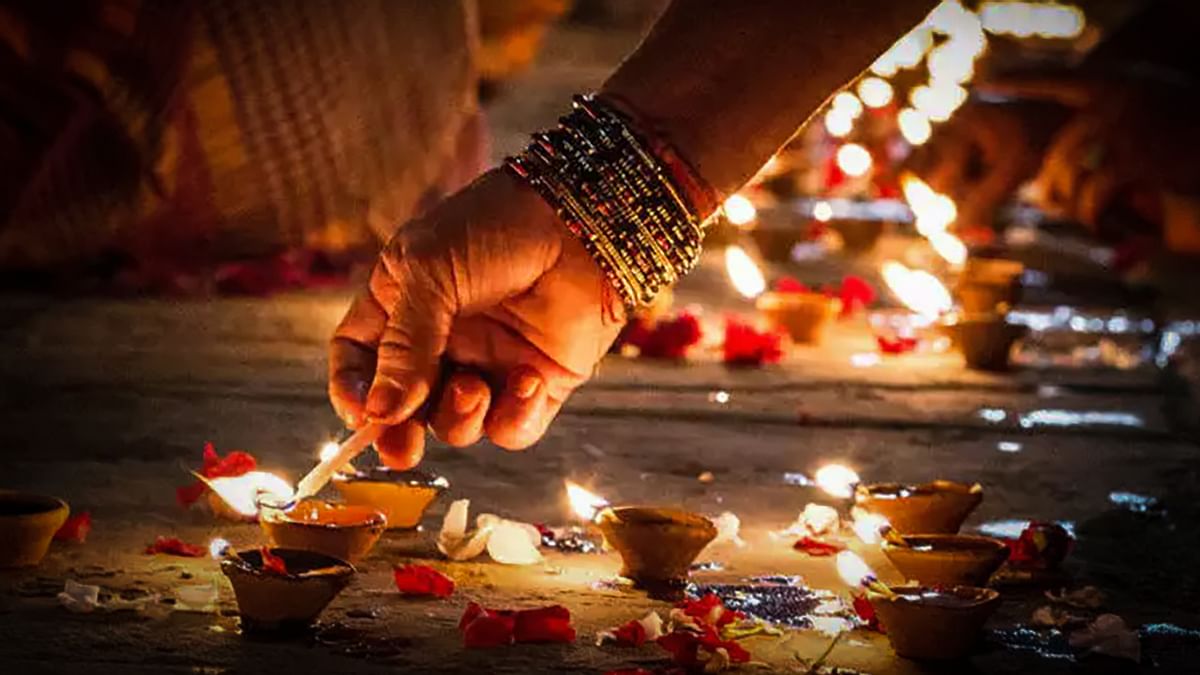 The significance of the day is connected to Hindu mythology and Lord Shiva's victory over the monster,Taraksura. Three sons bearing the demon's name were born: Taraksha, Vidunmali, and Kamalaksha. Three of them attained Lord Brahma's blessings through the performance of some severe penance.Dev Diwali is two weeks festivity commemorated after the main festival of lights- Diwali. Dev Diwali is also famous as Dev Deepawali or Tripurotsav. This big festival celebrates the death of the demon “Tripurasur” killed by Lord Shiva, therefore it is also referred to as Tripurotsav. Dev Diwali is observed on Shukla Pratipada during Kartik Purnima which is the first day of the bright fortnight of Margashirsha.

The two main rituals practised by devotees are deepdan (evening offerings of oil-lit lamps to Ganga) and Kartik snan (having a holy bath in the Ganges during the Hindu month of Kartika). In the evening, the Ganga aarti is also done. Beginning on Prabodhini Ekadashi (the eleventh lunar day of Kartika), the five-day festival lasts till Kartik Poornima. In addition to its religious significance, the festival is a time when the martyrs are remembered at the ghats through adoration of the Ganga and viewing of the aarti while lights are lit. When wreaths are laid at Amar Jawan Jyoti at Dashashwamedh Ghat and at the nearby Rajendra Prasad Ghat by police officers from the Varanasi District, 39 Gorkha Training Center, 95 CRPF battalion, 4 Air Force Selection Board, and 7 UP battalion of NCC (naval), Benares Hindu University, this is organised by Ganga Seva Nidhi (BHU). All three branches of the military (Army, Navy, and Air Force) also play the customary last post.

Patriotic songs, hymns, and bhajans are sung and the Bhagirath Shourya Samman awards are presented in the closing ceremony of Dev Deepavali.The festival is a top destination for tourists, and the sight of a million lamps (both floating and fixed) illuminating the river and ghats in vibrant colours has frequently been hailed as stunning by guests and tourists. Thousands of devotees from Varanasi, the nearby villages, and all over the nation assemble in the evening on the Ganges ghats to see the aarti on the festival night. To maintain order throughout the festival, the local government puts in place a number of rigorous security measures.

Other than the aarti at the Dashameshwar Ghat, all structures and homes are lit with clay lamps. Aarti is conducted by 21 young Brahmin priests and 24 young women, and it involves hymn chanting, rhythmic drumming, conch shell blowing, and brazier burning. Nearly 100,000 pilgrims visit the riverfront to watch the river sparkle with lamps. Tourists enjoy taking boat rides (in vessels of all sorts) down the riverfront in the evening when the ghats are all lit with lamps and aarti is being done.

Why is Dev Deepavali celebrated?

At the Ganges River bank in Varanasi, Dev Diwali is observed. Both the Diwali celebrations and the Tulsi Vivah ritual come to a conclusion with this. The religious significance of Dev Deepawali comes from the notion that Gods and Goddesses descend to earth on this day to take a sacred bath in the Ganges. In celebration of the Gods and Goddesses and the River Ganges, the entire ghat of the sacred river is covered in millions of tiny earthen lamps (diyas). At the Panchganga Ghat, this tradition of lighting clay lights was introduced in 1985.

Dev Diwali is celebrated at Varanasi on the shore of the Ganges River. With this, both the Tulsi Vivah ceremony and the Diwali celebrations come to an end. Dev Deepawali has religious importance because it is believed that Gods and Goddesses come to earth on this day to take a holy bath in the Ganges. The Ganges ghat is completely covered in millions of tiny earthen lights as a tribute to the Gods and Goddesses and the River Ganges (diyas). In 1985, the custom of lighting clay lamps at the Panchganga Ghat was established.

What to do on Dev Deepavali?

Devotees participate in the Kartik Snan, a sacred plunge in the Ganga, during this occasion. The next step is Deep Daan, which involves giving oil lamps to Goddess Ganga as a sign of respect. The main event of this holy festival is Ganga Aarti, which is conducted by 24 priests and 24 young girls with the highest reverence and devotion.

In Banaras or Varanasi, Dev Diwali is a festival renowned for its magnificence and grandeur. Numerous thousands of followers come to the holy city to participate in this religious ceremony. In Varanasi and several areas of Gujarat, this event is joyfully observed. On this day, rangoli is used to decorate homes, and oil lamps are lit in each room. Some houses also do the Akhand Ramayana recital, which is followed by the distribution of bhog.

The Dev Deepawali Festival's central custom is observed when the moon is visible. To honour the Ganga river and the Gods and Goddesses who have descended, the steps of the entire Ganges ghat, which stretches from its southernmost bank, known as Ravi Ghat, to Raj Ghat, are exquisitely lighted with small diyas (earthen lamps).