One of the most well-known and revered gods in the Hindu pantheon is Ganesha, also known as Ganapati, Vinayaka, and Pillaiyar. He is also worshipped as the deity of wisdom and fortune. India is covered in images of him. No matter their connections, all Hindu sects worship him.Ganesha is revered by Jains, Buddhists, as well as people in Nepal, Sri Lanka, Thailand, Indonesia (Java and Bali), Singapore, Malaysia, the Philippines, and Bangladesh. Other nations having sizable populations of ethnic Indians include Fiji, Guyana, Mauritius, and Trinidad & Tobago.Ganesha is easily recognized by his elephant head, despite the fact that he has numerous other characteristics. In particular, he is highly regarded as the remover of impediments and the bringer of good fortune, the patron of the arts and sciences, and the deity of intellect and understanding. The beginning of rituals and ceremonies honour him because he is the deity of beginnings. During writing sessions, Ganesh is praised as a protector of learning and the written word. His birth and exploits are described in much literature through legendary legends.

Ganesh first appears in paintings without a vahana (mount/vehicle). Out of the eight incarnations of Ganesh mentioned in the Mudgal Purana, five of them involve a mouse (shrew), the lion Vakratunda, the peacock Vikata, and the heavenly serpent Shesha in the case of Vighnaraja. In the four Ganesha incarnations described in the Ganesha Purana, Mohotkata employs a lion, Mayrevara uses a peacock, Dhumraketu uses a horse, and Gajanana uses a mouse. Ganesha is represented by the Jain community in a variety of ways, including as a mouse, elephant, tortoise, ram, or peacock.A mouse, shrew, or rat is frequently seen accompanying or riding Ganesha. The rat started to emerge as the main vehicle in Ganesha sculptures in central and western India during the 7th century, according to Martin-Dubost; the rat was always positioned close to his feet. In literary sources, the mouse initially appears as a mount in the Matsya Purana. It next occurs as a mount in the Brahmananda Purana and the Ganesha Purana, when Ganesha utilises it as his vehicle in his final form. The Ganesha meditation poem from the Ganapati Atharvashirsa mentions the mouse that appears on his flag. In the Ganesha Sahasranama, the names Makavhana (mouse-mount) and Khuketana (rat-banner) are mentioned.

Ganesh is revered on a variety of sacred and secular occasions, particularly when starting new endeavours like purchasing a car or launching a business. Ganapati is venerated by practically all castes and in every region of the nation, according to K.N. Soumyaji, who claims that "there can rarely be a Hindu]home in India which does not house an idol of Ganapati." Ganesh is propitiated, according to devotees, and in return, he bestows success, prosperity, and protection from harm. Invoking him at the start of prayers, significant tasks, and religious rituals is a practice throughout all Hindu religions. Beginning art performances like the Bharatnatyam dance with a prayer to Ganesh is a tradition among dancers and musicians, especially in southern India. Om Shri Ganesh Aya Namah (Om, salutation to the Illustrious Ganesha), for example, is a common mantra. Om Ganapatya Namah (Om Ganesha, Salutation to the Lord of Hosts) is one of the most well-known Ganesha mantras.Devotees present Ganesha with sweets like modaka and little sweet balls known as laddus. He frequently appears with a modakaptra, a dish of candy. Since he is associated with the colour red, worshippers frequently offer him red sandalwood paste (raktachandana) or red flowers. In addition to these items, dry grass (Cynodon dactylon) is employed in his worship. 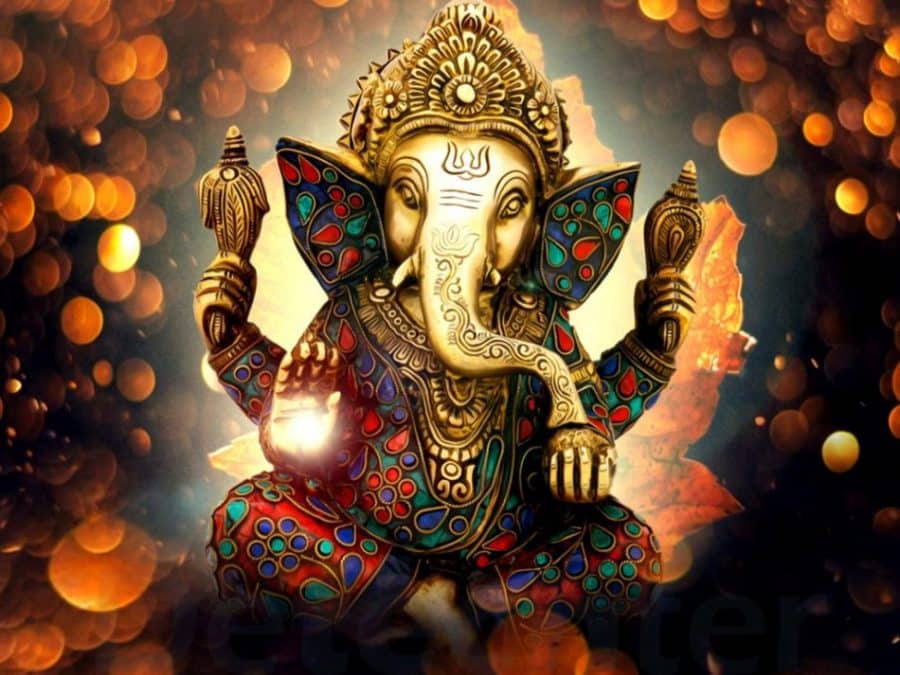 Ganesh Chaturthi, which usually happens in late August or early September, is the beginning of an annual event that honours Ganesh for ten days. People put in clay Ganesh statues to mark the god's arrival at the festival's opening. On the day of Ananta Chaturdashi, the idols (murtis) are submerged in the nearest body of water, marking the festival's conclusion. On the second, the third, fifth, or seventh day, some families have a ritual of immersion. Lokmanya Tilak turned the yearly Ganesh festival from a private family celebration to a significant public occasion in 1893.Ganesh was chosen by Tilak as the focal point for the Indian uprising against British rule because of his widespread appeal as "the deity for Everyman." Tilak initiated the custom of submerging all of the public images on the tenth day and was the first to erect big public images of Ganesh in pavilions. Though it is most well-known in the state of Maharashtra, Hindus today celebrate the Ganapati festival with tremendous zeal all across India. In addition, the event takes on enormous proportions in Mumbai, Pune, and the Ashtavinayaka temple belt nearby.
Let us discuss how it all started and what is the history behind this festival.

Lokmanya Tilak, an Indian freedom warrior, promoted it as a way to get around the colonial British government's 1892 anti-public assembly law, which forbade Hindu assemblies. It also goes by the name Ganesh Chaturvedi.
Others, like Kaur, assert that the festival was first celebrated in private and only later, in 1892, when Bhausaheb Laxman Javale (also known as Bhau Rangari), installed the first sarvajanik (public) Ganesh idol in Pune, did it become a public event. Lokmanya Tilak, an Indian freedom warrior, hailed the Sarvajanik Ganesh Utsav festival in his newspaper Kesari in 1893 and worked to turn the yearly celebration into a significant, well-attended public event. Robert Brown claims that Tilak selected Ganesh as the deity who could "bridge the gap between Brahmins and non-Brahmins" in order to create a grassroots unification among them to oppose British colonial rule. Tilak understood the appeal of Ganesh as "the god for everybody."
According to other researchers, the British Empire passed a number of ordinances in British India after 1870 that outlawed public gatherings of more than 20 people for social or political reasons out of fear of seditious assemblies. However, under pressure from the Indian Muslim community, religious gatherings for Friday mosque prayers were exempted. Tilak used this religious exemption to create Ganesh Chaturthi in order to get over the British colonial prohibition against big public gatherings. He thought that this effectively barred Hindus from holding public gatherings since their religion did not require daily prayers or weekly assemblies. In pavilions in Bombay Presidency and at other festival celebrations, he was the first to erect sizable public images of Ganesh.

Richard Cashman claims that after the 1893 Hindu-Muslim riots in Bombay and the Deccan riots, when Tilak believed that the British India government, led by Lord Harris, had repeatedly taken sides and not treated Hindus fairly because Hindus were not well organised, Tilak enlisted and fervently dedicated himself to the god Ganesh. In Baroda, Gwalior, Pune, and the majority of the Maratha region in the 18th century, according to Tilak's estimation, Ganesh worship and processions were already widespread among rural and urban Hindu populations, spanning social castes and classes. Tilak assisted in transforming the Ganesh Chaturthi holiday in 1893 into a significant public celebration and a covert platform for political agitation, intellectual debate, poetry readings, plays, concerts, and folk dances. 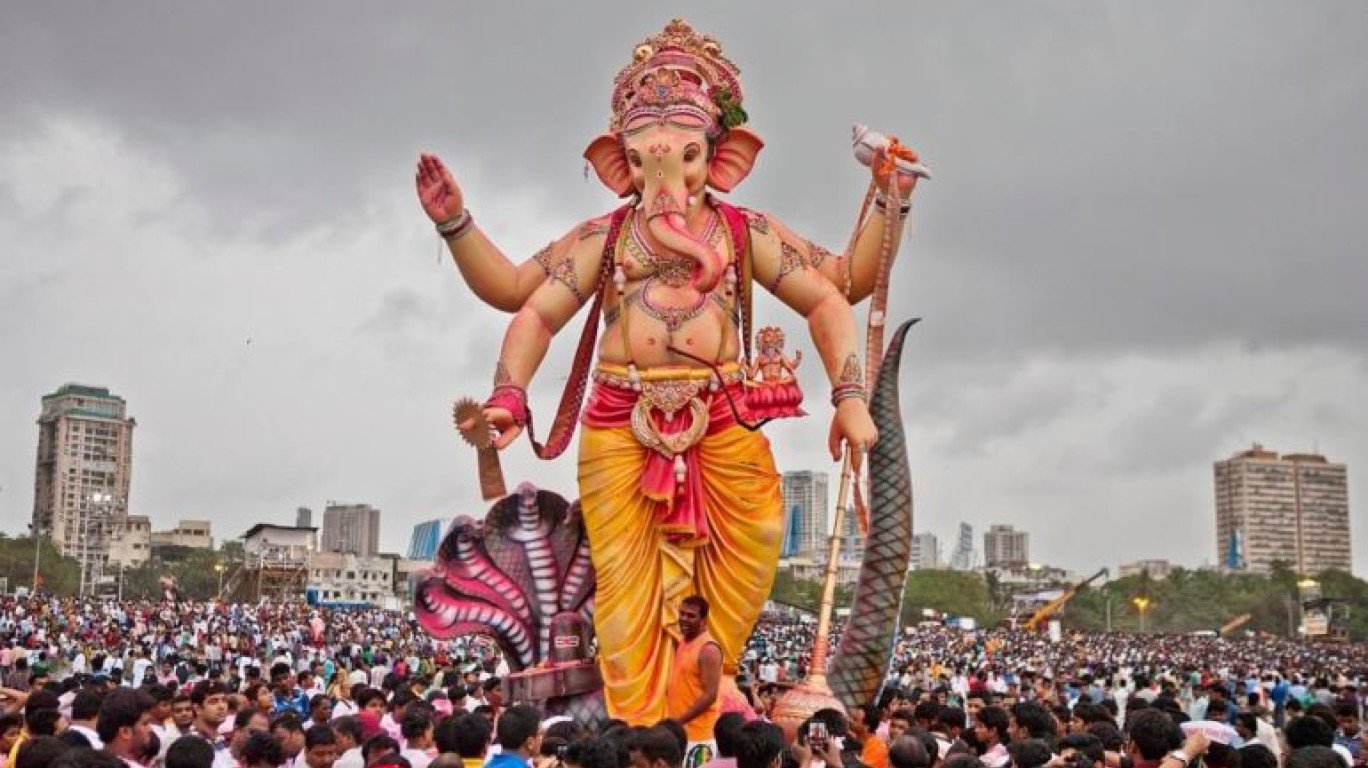 Ganesh Chaturthi was celebrated in Goa before the Kadamba dynasty. Hindu celebrations were outlawed by the Goa Inquisition, and Hindus who refused to become Christians were subject to harsh restrictions. Nevertheless, despite the limitations, Hindu Goans continued to practise their religion. Numerous families offer homage to Ganesh using patri (leaves used to worship Ganesh or other gods), a paper drawing, or tiny silver figurines. Because clay Ganesh idols and festivities were outlawed by the Jesuits during the Inquisition, several homes during Ganesh Chaturthi in Goa have concealed Ganesh statues as a special tradition.

Months before the festivities, public preparations start. Local companies or community organisations frequently sponsor or fund local Mandapas or Pandals with donations from the local populace. In Maharashtra, the process of creating a murti typically starts with "Padya pooja," or worshipping Lord Ganesh's feet. On the day before the celebration or the day before, the Murtis are carried to "pandals." The pandals have ornate lighting and decorations. 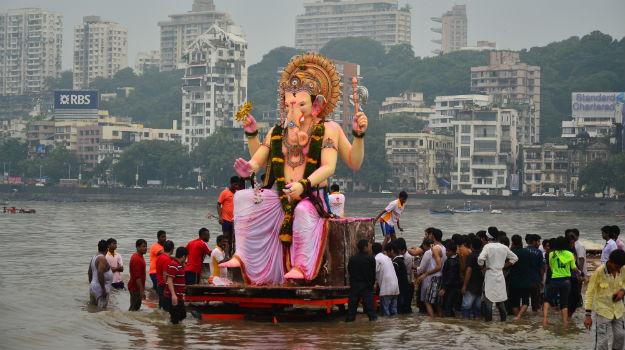 At home, purchasing puja supplies or accessories a few days ahead of time and scheduling the Ganesh murti up to a month in advance are both part of the festival preparation (from local artisans). Either the day before or the day of Ganesh Chaturthi itself, the murti is brought home. Before installing the idol, families adorn a small, tidy area of the house with flowers and other vibrant decorations. The Murti and its shrine are embellished with flowers and other materials before being erected. On the festival day, during a specific auspicious time of the day, the ceremonial installation of the clay murti (idol) is performed along with chants of holy mantras and pooja, including bhajans.
It is common for local youth organisations, neighbourhood associations, or groups of tradespeople to host public festivities of the festival. Members of the association organising the event, as well as locals and companies, contribute funds for the public festival. Installation of the Ganesh idols and associated statues takes place in temporary structures called mandaps or pandals. The festival includes cultural events like singing, theatre, and orchestral performances as well as civic events like free medical examinations, blood donation centres, and charitable donations for the needy. In Mumbai, Ganesh Chaturthi is a significant business event in addition to its religious significance.The festival, which serves as a platform for up-and-coming artists, provides a sizable portion of the income for many artists, businesses, and industries. The ceremony also includes followers of various religions.

As we all know how much Ganesh loves food, especially sweets, so the “bhog” offered to him and the food prepared is also very special, specifically in Maharashtra.
“Modak” is the main sweet delicacy served during the celebration (modak in Marathi and Konkani, modakam or kudumu in Telugu, modaka or kadubu in Kannada, kozhakatta or modakkam in Malayalam and kozhukattai or modagam in Tamil). 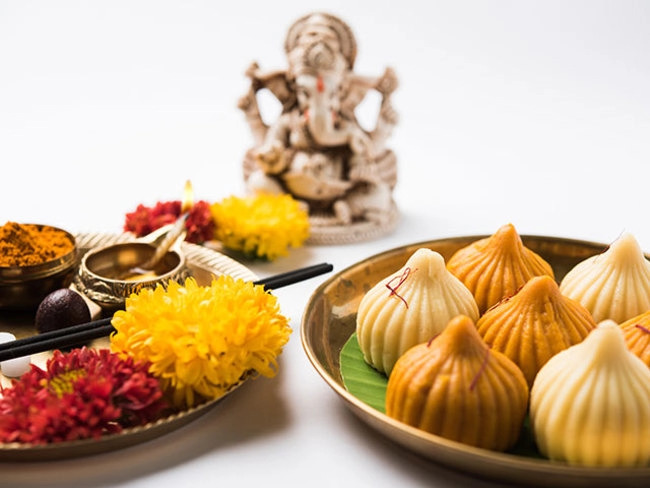 A modak is a rice or wheat flour-based dumpling that is steamed or fried after being filled with grated coconut, [jaggery], dried fruits, and other ingredients. The karanji (karjikai in Kannada), which resembles modak in taste and composition but has a semicircular form, is another well-known sweet delicacy. The Goans and the Konkani diaspora refer to this sweet supper as Nevri and associate it with the Ganesh holiday.In some areas of Karnataka, “Panchakajjaya” is an offering presented to Lord Ganesh at this occasion. It consists of roasted Bengal gram powder, desiccated coconut, sugar, ghee, and sesame. There are various panchakajjaya variations available. Aval, roasted chana dal (putani), roasted Bengal gramme, and roasted green gram can all be utilised.

The custom of Ganesh Visarjan/Nimajjanam is observed on the final day of the festival. Anant Chaturdashi is another name for the last day of the 10-day festival. As implied by the name "visarjan" or "nimajjanam," Lord Ganapati's idol is immersed on this day in a river, sea, or other body of water (the word "visarjan" or "nimajjanam" denotes immersion). On the final day, the followers conduct immersion on the idols of their beloved God as they parade through the streets. 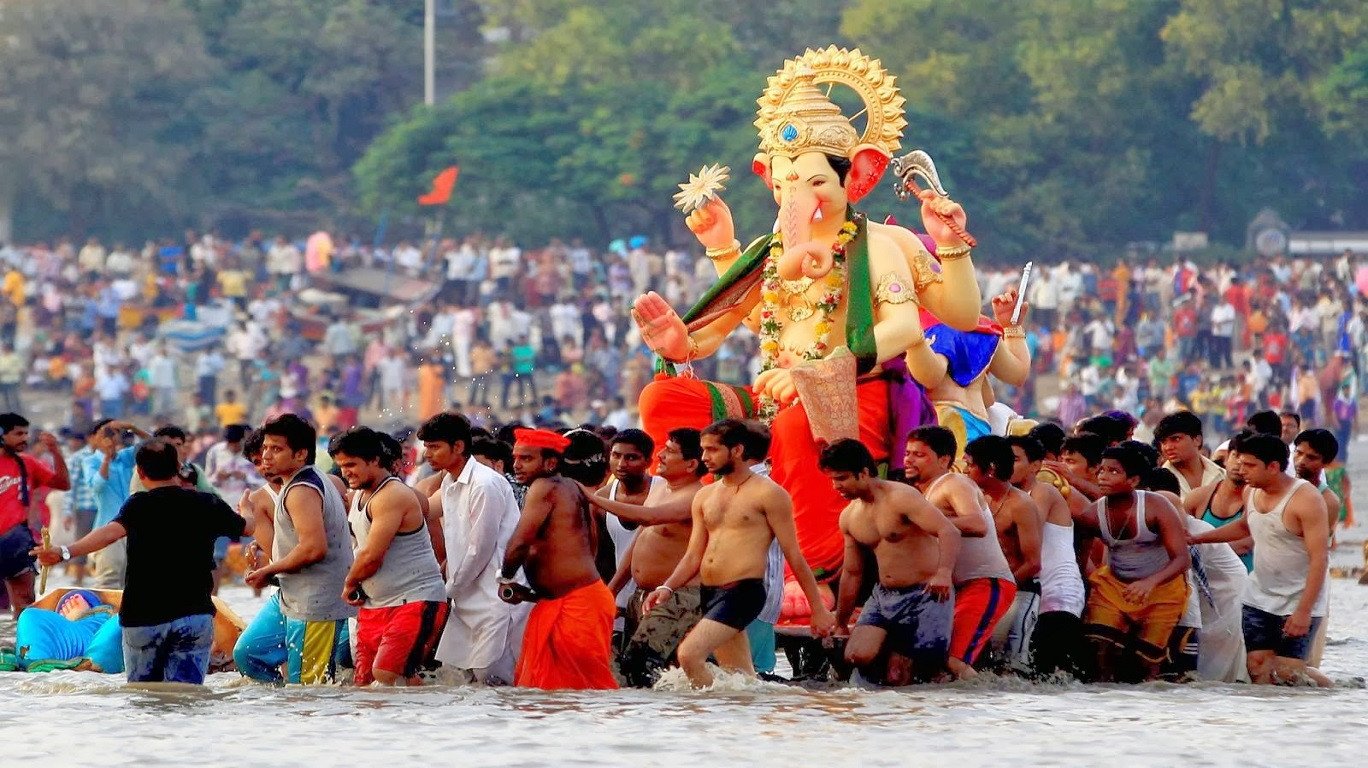 The mythology of Ganesh visarjan/Vinayaka Nimajjanam has a fascinating backstory. Atop the festival's final day, it is thought that Lord Ganesha rejoins his parents, Lord Shiva and Goddess Parvati, on Mount Kailash. The significance of the cycle of birth, life, and death is also symbolised by the Ganesh Chaturthi event. The Lord of New Beginnings and Remover of Obstacles, Ganesha, is revered in both roles. According to popular belief, when the Ganesha idol is taken out for immersion, it also carries the numerous obstructions in the house, and both the hurdles and the visarjan/nimajjanam are destroyed. Every year, people look forward to Ganesh Chaturthi with tremendous expectation.