We have all heard the word Mahalakshmi at a certain point of our life, be it the name of a place or even denoting an individual. Interestingly, the city of dreams has a unique place, by its name, precisely between Mumbai Central and Lower Parel, Mahalakshmi.

Denoting an individual? A laxmi of great essence, purity, wealth and prosperity.
Laxmi can also be depicted as the right woman at their home as a laxmi to the family they belong to.

That is what our general perspective over it is. But did we ever give it a deeper thought?
Let’s have a look at it.

Goddess Mahalaxmi is the Supreme and Divine form of Shri laxmi, capable of granting the dual aims of mukti and bhukti, residing in Vaikunta as a companion of Lord Vishnu, the superior form of Narayana. The creation of the world is believed to have formed from the womb of Goddess Mahalakshmi and it is often considered that all gods and goddesses sprung from her. Along with Lord Vishnu, considered as a repository of all wealth of the universe. 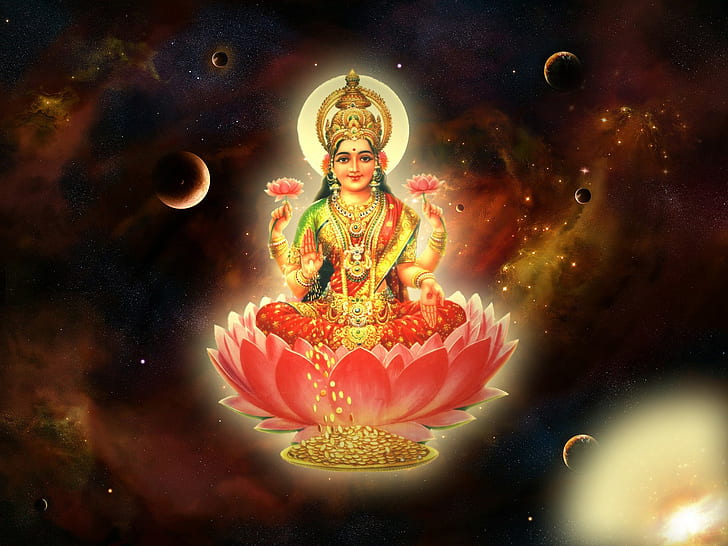 Mahalakshmi has a portrayal of four arms, holding a lotus and white flag in two while one of the other two in abhaya mudra, as a gesture of reassurance and safety, dispels fear, accords divine protection and bliss, where the right hand is held upright and the other in varada mudra, where the right palm is held out with 2 fingers pointed downwards. Goddess Mahalakshmi is often known as Ramaa and Indira.

The 8 forms of lakshmi are:

Are Lakshmi and Mahalakshmi same?

Often the primary and primordial form, Adi Lakshmi is known as Mahalakshmi. This divine form is depicted as a companion of Lord Vishnu.

Are Mahalakshmi and Durga same?

Defining the Shakti principle, wherein the goddesses stand independent more than they stand as a companion/consort to male gods. Goddess Mahalakshmi is the presiding goddess of Devi Mahatmya. Mahalakshmi takes the divine form of Durga to annihilate Mahishasura.

Since Goddess Mahalakshmi is a representation of a married woman, she is offered flowers and other offerings which denote love, desire and belongingness, mostly red flowers such as hibiscus. The Goddess likes cleanliness and keeping the place of worship or even the normal place of an individual attracts her blessings.

Lighting of lamps are also considered since the placement of lamps remarks the removal of negativity from the environment. 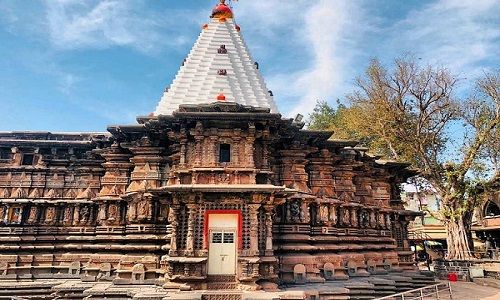 The history of the establishment of Mahalakshmi temple dates back to an incident that happened between Lord Vishnu, Sage Bhrigumuni and Goddess Lakshmi in Vaikuntha.

Once upon a time when there was a big fight between the Gods and the demons, the demons lost badly. The remaining demons were chased down to the hermitage of Shukra by Lord Vishnu and the other Gods. At the time when the demons arrived, neither Rishi bhrigumuni nor Shukra was present. Kavyamata, companion to rishi bhrigumuni , gave the demons shelter and protection since she treated them as her guests. The hermitage was protected by an invisible magical shield, which could not be broken down even by the greatest of gods. Observing and assessing the entire situation by Lord Vishnu to the shelter, protection and retaliation to harm or even hand over the guests, he summoned his Bhramastra, Sudarshan Chakra and deployed it towards the demons to save the world from such evils. While protecting the guests, even the head of kavyamata was cut off. To this major killing, Sage Bhrigumuni was angered and he fought against Lord Vishnu, wherein Lord Vishnu did not fight back. One of the incidents where Sage Bhrigumuni stepped over the chest of Lord Vishnu, Goddess Mahalakshmi was furious and humiliated, since it was the Chest of lord Vishnu where she resided. Unable to bear the insult of her companion, Lord Vishnu, she decides to leave Vaikuntha. Also at that time, a demon named Kolasura was depriving the city of Kolhapur from its natural water source and hence to defeat the demon and rescue the people she came down to earth. The place where she first landed was Kolhapur. Later, after the demon surrendered, he pleaded that the name of the city be named after him and hence the name, Kolhapur. 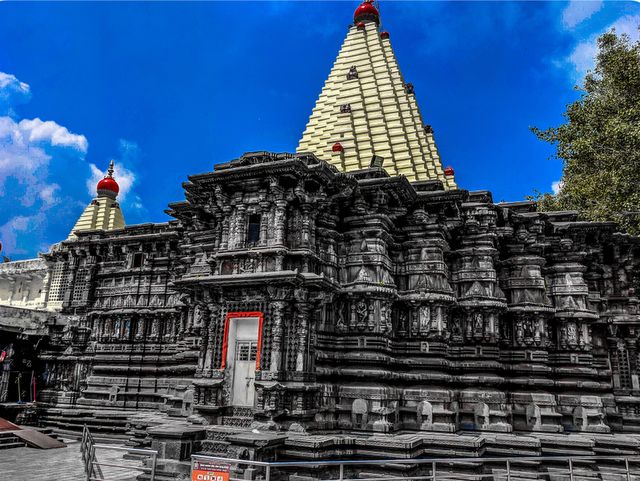 The temple is mentioned multiple times in the Puranas. It was built by the karnadeva of Chalukya time, although different histories like Bhandarkar and Khare, Itihasa Chakra indicate different timelines of its existence. The temple was expanded by Gandavadix by establishing the Mahakali Mandir in the 9th Century. Yadav king Tolum built Mahadwar, the east gate, where the 64 idols carved by the Jain monk, Shilhara, of the Maha Sarasvati mandir are placed.

The Maratha reign saw its repair due to multiple invasions over that part of India, followed by the Mughal empire where the idols were hidden for their protection. During Chhatrapati Sambhaji II's Reign, an individual named Narhar Bhat Shastree had a dream of goddess Mahalakshmi of the idol’s location, which he told to Chhatrapati. Believing the dream, Chhatrapati Sambhaji started a search and later the idol was found in a house in Kapila Teertha Market in the city.
As time passed by, Goddess Mahalakshmi was considered as the Deity of Maharashtra.

When is Mahalakshmi temple, Kolhapur open?

Entry to the temple is absolutely free, although every devotee is required to have a valid e-pass. The darshan time changes twice a week. They are:
Wednesday to Monday -

On the occasion of Ratha Saptami, A festival of sunshine and sun rays is celebrated, when direct sun rays fall on the idol of goddess mahalakshmi through the small window on the western wall at the time of the sunset for 6 days, that is, with 3 days twice in a year.
The days are:
31st january - 2nd February
9th -11th November

If you are planning to visit Kolhapur for either leisure or pilgrimage occasion via train, Chhatrapati Shahu Maharaj Terminus (station code: KOP) is the railway station you would get off at. It is the main and primary railway station of the city.
It is closest to the temple, which is only 2.5kms away.

If you are planning to visit Kolhapur for either leisure or pilgrimage occasion via an aircraft or flight, there is no direct flight currently active in India that connects any city with Kolhapur Airport directly. Instead, expect connecting flights or multiple layovers. Currently only IndiGo operates in that city. Compared to the train, it is a little bit far. The temple is about 9.9 kms away from Kolhapur Airport.

If you are planning to visit Kolhapur for either leisure or pilgrimage occasion via a bus, you would find multiple bus services throughout that would drop you at the highway normally, unless otherwise mentioned or included in their respective bus route map for the particular journey. For further details, it is advisable to contact the bus services department.

Situated near the shores of Arabian Sea, precisely at Bhulabhai desai Road in Mahalaxmi area resides Goddess Mahalakshmi along with idols of Goddess Mahakali and Mahasaraswati, is one of the most famous temples in Mumbai. 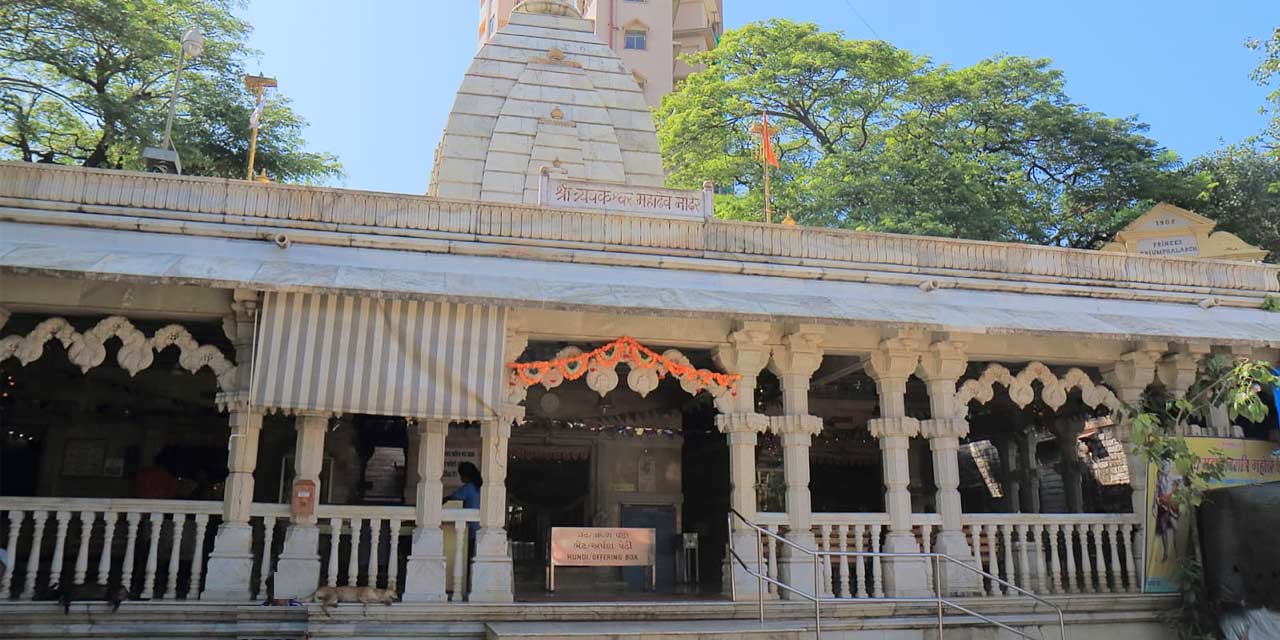 The Mahalakshmi Temple of Mumbai was built around 1875. History depicts the foundation of this temple to a famous project named Hornby Vellard, which was a major project connecting and uniting all the 7 islands of Mumbai. When the project started, the sea wall could not withstand and broke twice, even after repeated repairs. It was only after a dream that chief engineer Pathare Prabhu saw the exact location of the hidden Mahalakshmi devi statue. After the discovery of the statue and an establishment of a temple dedicated to Goddess Mahalakshmi, the project finally got completed without any further problem.

When is Mahalakshmi temple, Mumbai open?

Navratri is one of the biggest hindu religious festivals observed in the honour of Goddess Durga for 9 days, twice a year. During this time, the Mahalakshmi Temple is decorated with flowers, lamps, and candles.Normal and pilgrimage tourists mostly bring sweets and flowers for puja during this time.

If you are planning to visit Mumbai for either leisure or pilgrimage occasion via train, Chhatrapati Shivaji Maharaj Terminus Railway Station (CSMT) is the station where you would get off. You would often be told by people to get off at Dadar station but technically that’s a longer route of 8.4 kms compared to 6.2 kms from CSMT, unless the place of stay is closer to dadar.

If you are planning to visit Mumbai for either leisure or pilgrimage occasion via an aircraft or flight, Chhatrapati Shivaji Maharaj International Airport (CSMIA), is the airport you would land at. There might rise a confusion based upon the two terminals that is present throughout the city.
Terminal 1: Domestic Airport
Terminal 2: International Airport
The domestic airport (Terminal 1) is about 22 kms from the temple, whereas the international airport (Terminal 2) is around 20 kms from the temple. Even after the completion of the pilgrimage journey or stay in the city, it is often advisable to verify the terminal correctly before setting course or even booking a cab.

If you are planning to visit Mumbai for either leisure or pilgrimage occasion via a bus, you would find multiple bus services throughout that would drop you at the highway normally, unless otherwise mentioned or included in their respective bus route map for the particular journey. For further details, it is advisable to contact the bus services department.