Dwarkadhish Temple is a hindu temple worshipping the Lord Krishna as the cosmic deity, the ultimate representation of God. The idol or altar of Lord Krishna in the temple is of jet black in colour composition adorned with gemstones and silks. Dwarkadhish temple is one of the sacred Char Dham pilgrimage journeys apart from Badrinath, Puri and Rameswaram. It is the 98th out of 108 divine realms or divine temples worshipping the Trivikrama form of Lord Vishnu having four (4) arms. 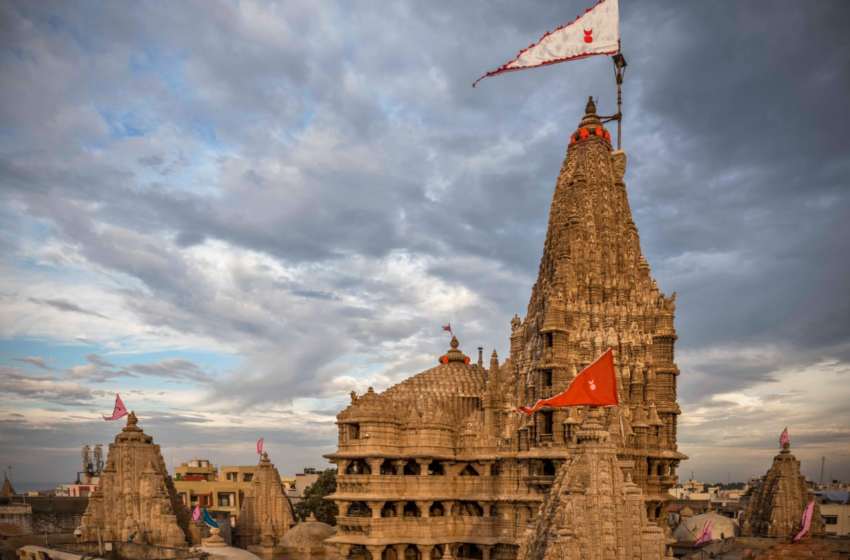 The word Drwarkadhish has its inner meaning wherein it represents the King of Dwarka located in the Dwarka city of Gujarat state. The city of Dwarka was constructed and built by Lord Krishna. It is believed by great personalities tha tLord Krishna came to Dwarka after he realised that his fight with Jarasandh was drastically affecting the peace and prosperity of his kingdom. Dwarka is considered one of the seven holy cities of India (Sapta Puri).

The other holy cities of India are:

Dwarka is also the location of one of the four (4) holy peeth named Dwarka Sharada Peetham established by Adi Shankaracharya, the 8th Century Hindu theologian and philosopher to preach the Sanatan Dharma. '

The Vedantic Mantra for Peetham is Tattvamasi (that thou art).

The city of Dwarka can also be seen in the epic Mahabharata as the Dwarka kingdom, situated at the banks of river Gomati.

As of today when we visit any famous and popular religious and pilgrimage destination we have this expectation of the place to be crowded and overpopulated with both the local people and tourists from all over the world. But Dwarka city is actually a quiet, calm and peaceful place. But let it not hallucinate you with expectations of no crowd at all. There were situations of stampedes within the main Dwarkadhish temple from time to time.

According to Hindu mythological traditions, it is believed that Dwarkadhish Temple was built by Lord Krishna’s grandson Vajranabha around two thousand (2000) years ago and later expanded around the 15th and 16th centuries. It is also believed that the original Dwarkadhish temple built by Vajranabha was destroyed by Sultan Mahmud Begada around the fall of the 14th century. Later it was rebuilt by Raja Jagat Rathore. 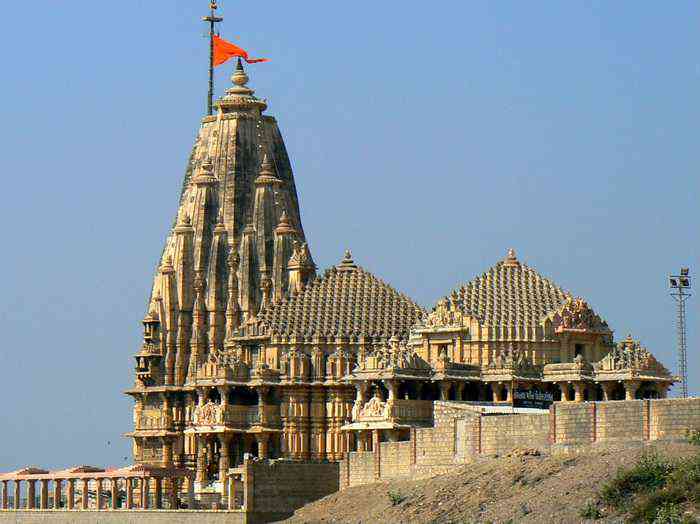 The recent establishment of the temple is in Chalukyan style consisting of beautifully carved stone which has minute details inscribed by the successors which ruled over that region from time to time, and was reconstructed mainly with limestone around the 15th and 16th centuries. The highest peak of the temple is 51.28 metres having a height of seventy eight (78) metres with a fifty two (52) yard long triangular flag of the Sun and the Moon depicting the existence of Lord Krishna till the existence of the Sun and the Moon is hoisted on the top of the temple with multilayered spire. This particular triangular flag is replaced four (4) to five (5) times a day by a new flag. Therefore, most of the devotees pay a huge sum of donations to the charity so that the expenditure of the new flag can be covered with the love they showered.

The east-facing main Shrine of the Dwarkadhish temple is a five storied beautiful architecture building aided by seventy two (72) pillars known as Jagat Mandir or Nija Mandir, with sixty (60) pillars made of sandstone situated at a height of 12.19 metres which is near about forty (40) feet.

The two (2) main doors of the Dwarkadhish Temple are:

Devaki was the mother of Lord Krishna whereas Radha Rani was the dearest of Lord Krishna. Depicting the strong bonds and relationship of Lord Krishna with both of them, there is another shrine dedicated to them which is present just in front of the main central Dwarkadhish Temple.

Some facts and legends of Dwarkadhish Temple:

1. It is said that Sage Durvasa cursed Rukmini when Rukmini got thirsty pulling the chariot of Durvasa after which the water provided by Lord Krishna to Rukmini was drunk by her without offering it to Sage Durvasa. This made Sage Durvasa very angry and cursed her to remain there forever. Therefore it is believed that the place where Rukmini’s shrine is found today on a barren land, two (2) kilometres outside of the town of Dwarka is the place where this incident took place.

2. It is said that the famous Rajput Princess Meera Bai merged with the deity of the Dwarkadhish temple.

The biggest festival of Dwarkadhish temple is Janmashtami, which is celebrated as the birthday of Lord Krishna.

Some of the other festivals are:

The nearest railway station is the Dwarka Railway Station which is about 1 kms from the main Dwarkadhish temple and the only train leaving New Delhi for Dwarka is Uttaranchal express. But do refer to your private booking agency or IRCTC for correct information regarding the train journey.

Jamnagar Airport is the nearest airport at a distance of about forty five (45) kms to the City of Dwarka. Thereafter, the tourists and devotees can commute to the Dwarkadhish temple via taxi or bus. Air India and Star Air are the only two (2) airlines that fly to Jamnagar Airport.

Cabs and taxis are the optimal and convenient option. Ola, Uber, Meeru or any other private tourism vehicles are suitable for groups. For single visitors, you can opt for Rapido or ola bike

Dwarka is on the state highway connecting the town with Jamnagar and Okha. State transport buses and luxury coaches connect the town to various parts of Gujarat.

Other Rules and Regulations:

1. No camera or any kind of mobile is allowed. In case they allow the mobile phones, it will solely be the responsibility of the holder or owner to keep it either on silent or vibration mode, and not to take any kind of pictures or videos of any format.
2. No photography is allowed.
3. It is suggested not to carry valuable goods such as jewellery or other such sort.
4. Wheelchairs are available on request for elderly and physically challenged people.