The Shree Siddhivinayak Ganapati Temple in Prabhadevi, Mumbai, has been committed to granting the wishes of visitors for more than two centuries. Due to his celestial reputation as a problem-solver, Shree Ganesh is the first deity to be worshipped in India before beginning any new initiative or business endeavour (Vighnaharta). One of the most well-known and significant places of worship in Mumbai is without a doubt the Shree Siddhivinayak Ganapati Mandir, which is located in Prabhadevi. 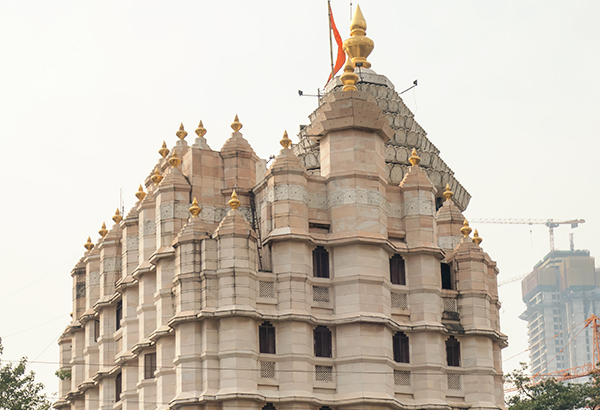 Its first renovation was carried out on the Kartik Shuddha Chaturdashi of the Shalivahan Samvatsar 1723 according to the Hindu calendar (A.D. 1801), conducting all ceremonies in accordance with Hindu religious law. According to material that is readily available, the shrine has been there for at least 200 years. The Banganga compound in South Mumbai also has a marble idol that is identical to this one. Both of these idols appear to have been carved by the same artist. It may be assumed that the structure of the shrine in the Prabhadevi temple must have been roughly 500 years old given that the old Banganga shrine complex is more than 500 years old.

The old shrine's building was quite modest and small, making it more difficult for the increasing number of devotees to seek Shree's Darshan—the joyous sight of Lord Ganesh—day by day. The number of devotees who can receive Darshan is capped at 15-20. It was intended to enlarge and renovate the current shrine construction in order to provide the amenities for simple and quick darshan, the satisfaction of services, and devotion, including facilities for offerings and numerous ritual procedures.

The foundation stone for the proposed project was placed on April 27, 1990, an auspicious day of Akshay Tritiya- Vaishakh Shuddha Tritiya of Samvatsar 1916, by the then Chief Minister Shri Sharad Chandraji Pawar. After overcoming many obstacles, the current majestic and opulent edifice was ultimately finished. On a very great scale, the Vaastu's Kalash (Dome) Pratishthapana was performed and observed. Then-Chief Minister Shri Sharad Chandraji Pawar opened this occasion.

On the auspicious day of Jyeshta Shuddha Chaturthi of samvatsar 1916, or Monday, the 13th of June 1994, revered Jagadguru Shri Shankaracharya Dakshinamnay Shri Sharadapeeth Shrungeri Shri Shri 1008 Bharatiteertha Mahaswamiji performed the rituals of Kalas Pratishthapana - the Apex Induction ceremony. In the 200-year history of the shrine, this day is noted as being the most remarkable.

Who is the God of Siddhivinayak Temple:

Siddhi Vinayak Temple or a Siddhivinayak mandir is known for the establishment and worship of the Hindu galactic Demigod, son of Lord Shiva (Adi Shankara) and Parvati (Nature), Lord Shri Ganesha. He is the first God to awaken in our conscious mind and preside over our inner transformation.

Lord Ganesha is popularly known to be a friend who helps us achieve the 4 pillars of righteousness. They are:

Why is Ganesha known as Siddhivinayak:

When Lord Brahma was busy creating the world, Lord Vishnu fell asleep. Meanwhile, Two (2) demons came out of his ears and started troubling everyone present there. Upon the request of all the disturbed DemiGods, Lord Vishnu attempted to kill them but failed on doing so. Lord Vishnu later started worshipping Lord Ganesha and it is with his blessings that he could finally defeat the two (2) demons. Hence the place is called Siddhatek and Lord Ganesha is called Siddhivinayak. The word Siddhivinayak means Lord who has power and authority over obstacles and hurdles.

The Shree Siddhivinayak idol is made of black stone, stands 2.5 feet tall from the ground, and measures about 2 feet wide. The idol has a right-tilted trunk, a lotus in the upper right arm, a miniature hatchet in the second arm, a chain of holy beads in the lower right arm, and Lord Ganesh's favourite sweet treat, ladoo, in the bowl on the left arm. The statue is three-eyed like Lord Shiva and is sculpted on a black stone with Mooshak, the Lord's mouse-bearer. 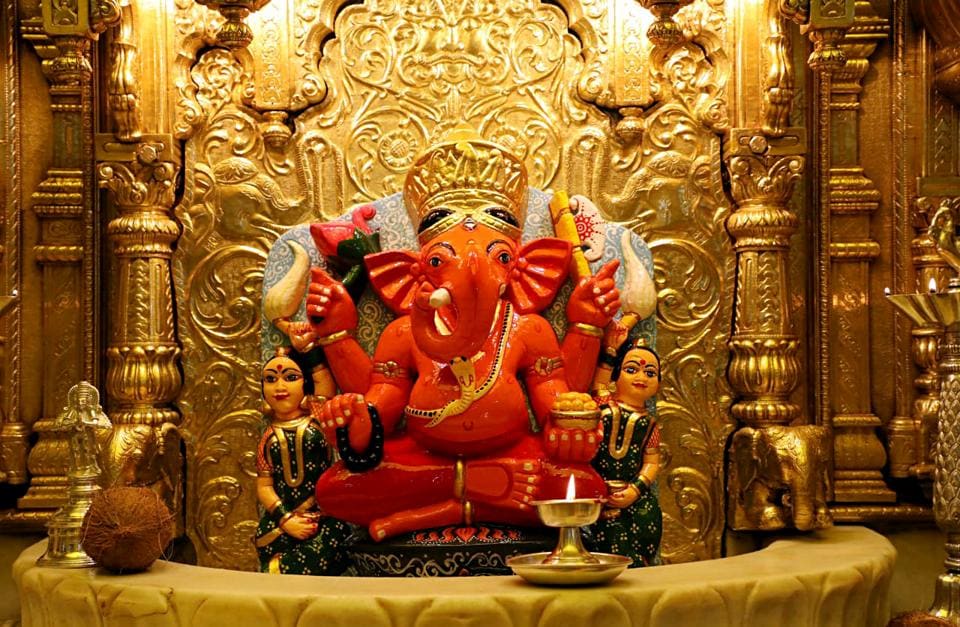 The Lord Shree is seated in Padmasana, the lotus position, on the base of the throne. Lord Ganesh, also known as Ganapati or Mahaganpati, is the chief of the Ganas and is depicted as having an elephant's head in his Nar-KunjaRoop form.

The idol too has four (4) hands termed as Chaturbhuj holding:

1. A Lotus Flower in its top right hand
2. A Japamala of the holy beads in the bottom right hand
3. An axe in the top left hand
4. A bowl filled with delicious modak(considered Ganesha’s one of the favourites) in the bottom left hand

Numerous devotees visit the temple on Tuesdays, Sankasht Chaturthi, and Aangarak Chaturthi, which are auspicious days, to receive Darshan and have their desires granted. The Temple is a five-story building with a central shrine built into the walls, and every effort is made to offer worshipers with open space. The temple's new building was started on June 13th, 1994. The former zenith, which weighed 1500 kg and stood 12 feet tall, was taken down during construction and replaced. 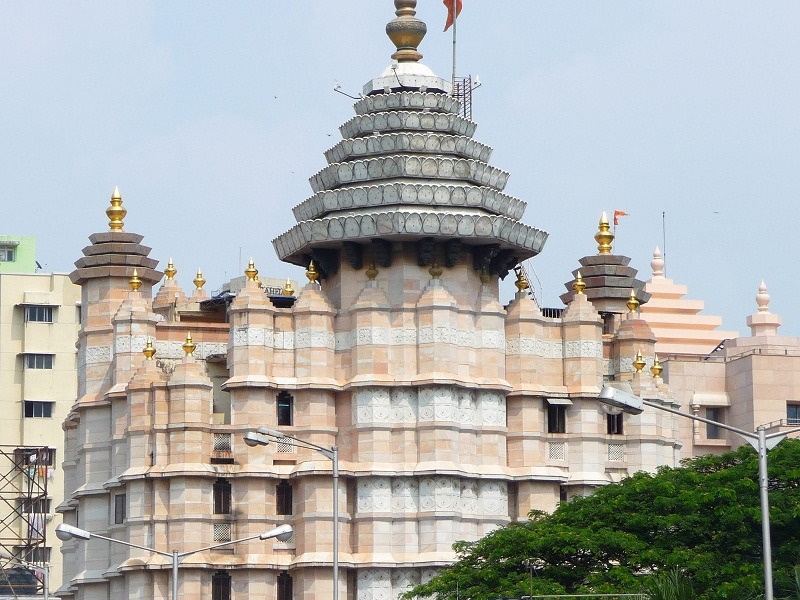 The central Ganesha idol and the inner dome of the sanctum are covered with gold plating. Additionally, there is a Hanuman temple nearby. The temple's dome-shaped facade is illuminated with a variety of colours in the evenings, and the colours are constantly changing. Shri Siddhivinayak Ganpati's statue is precisely beneath the dome. Ashtavinayak figures are etched on the pillars.

The Shree's majesty, power, and presence are expressed in the temple's main crowning splendour, the magnificent gold-plated dome. Due to traffic or time constraints, devotees who can't see the main idol frequently seek out the dome's darshan instead, which offers them the same level of comfort. The comfort of the devotees and their surroundings is the foundation of the entire architectural plan. In addition to the physical building of the temple, repairs and restorations were made to the faith of the worshippers who came to the location.

Festivals Celebrated at the Temple:

Many festivals are celebrated at the Temple, they are:

In August and September, the Siddhivinayak Temple, Dadar in Mumbai hosts the largest event honouring Lord Ganesha. The celebrations run for ten days, with "Ananta Chaturdashi" being the name of the final day. A huge clay idol of the Lord is created two to three months before the festivities begin. After that, the deity is elevated onto a huge pedestal and embellished with garlands. In a ceremony called the Pranaprathishtha Pooja, the idol is set up in the temple. To please the Lord, Vedic hymns and Shlokas are recited. Modaks, coconut, and jaggery are examples of offerings presented to the Lord in order to receive his blessings. Throughout these 10 days, the temple is visited by tens of thousands of people hoping to see the magnificent deity. The idol is brought out in a large procession on the eleventh day when people are dancing and chanting religious songs. The idol is subsequently submerged in the ocean as a farewell to the Lord, who departs for his residence in Kailash.

Every month of the Hindu calendar, the fortunate dates fall on the fourth day of the Krishna Paksha, or the waning phase of the moon. Ganesha followers all throughout the world conduct fasts on this day because it is so holy. The Bhavishya Purana and the Narasimha Purana are two Puranas that discuss the significance of the day. Yudhishthira of the Pandavas is said to have heard Lord Krishna himself describe the significance of the Pooja. The temple conducts significant Poojas to the Lord on this day in order to remove barriers from the devotee's path and bring prosperity. The Purush Sukt, Brahmanaspati Sukt, Atharva Sheersha, Ganapati Sukt, and Saraswati Sukt are recited during Mahapuja for the deity.

Lord Hanuman was born on this day. In Maharashtra, the event is observed during the Chaitra month. On this day, the Lord is the subject of special devotional talks and Poojas that start at daybreak and end after sunrise. On this blessed day, it is said that the Lord was born at sunrise.

The auspicious day is observed in the Temple throughout the month of May. On this day, special Poojas for the Lord are done. The benefits of doing Jaap, Yagya, and Punya are thought to last a lifetime for the devotee and never diminish. Akshaya Tritiya is considered to be one of the days that is free from all negative consequences, along with Ugadi and Vijayadashami.

1. Bollywood superstar Sanjay Dutt visited this temple straight after he was released from jail on 25th February 2016
2. Apple CEO Tim Cook started his India trip through his prayers and offerings in 2012
3. It is believed that whispering words of utter desire in the ears of the huge silver mice established makes that which gets directly conveyed to the ears of Lord Ganesha.

The entry fee to the temple is free of cost. Visitors, devotees and all kinds of bhakts can visit with pure devotion to the temple without worrying about any entry fee. But there is a special pass for direct entry into the temple avoiding the queue. Siddhivinayak Temple is open throughout the year.

How to Reach the Mandir:

The nearest airport is Chhatrapati Shivaji Maharaj International Airport, you can take a local train or taxi from the airport to the Siddhivinayak Mandir.
By Train:

1. Trains from a far location to the Siddhivinayak Mandir would be a great option. Make sure to get down at Dadar station. (Note: Dadar is quite crowded almost all the time during the weekdays as it is a junction for both western and central railways. For a faster commute, get on a fast train as all fast trains halt at Dadar)
2. In case you want to avoid the massive crowd at Dadar, Lower Parel train station would be the best option. Just make sure to catch a slow train.
3. For people coming via harbour line, change the train at Kurla train station to either fast or slow trains as per your comfort as both slow and fast trains will halt at dadar)
4. For ease of travelling, download the m-indicator app from the google play store. This is an app that will provide details regarding all the local transport and live running status.

Cabs and taxis, are the optimal and convenient options to reach Siddhi Vinayak Mandir. Ola, Uber, Meeru or any other private tourism vehicles are suitable for groups. For single visitors, you can opt for Rapido or ola bike.

Join the Shri Siddhivinayak Temple Community on Utsav to get all Updates!

2. It is suggested not to carry valuable goods such as jewellery or other such sorts.

3. For Non Residents of India (NRIs), there is a special darshan package therefore do carry your nationality proof for the same.

4. Wheelchairs are available on request for elderly and physically challenged people.

5. Below are items that are not allowed:

b) Garlands/Mala and Prasad
-In case they allow garlands and prasad, buy them from Phool Gali, a lane nearby selling flowers, prasad and puja thalis
-While buying, make sure the vendors are weighing the right quantity for the right amount.

c) Mobile phones
-In case they allow the mobile phones, it will solely be the responsibility of the holder or owner to keep it either on silent or vibration mode, and not to take any kind of pictures or videos of any format.

d) Any sort of cameras
In case you reach the temple with the above items or any other items that are not mentioned but also not allowed can safely be safeguarded by booking a security locker within the premises for:
Cameras- Rs. 10/-
Laptops- Rs. 50/-

e) Shoes are not allowed inside the temple. The shoes or any kind of footwear must be deposited at the footwear stand for the safety and security of the footwear against a token which has to be kept securely. This is a free service but you can donate a minimal amount to the service renders for their hard work and service.