Top 10 Ganesh Mandals of Mumbai | Must Visit Mandals in Mumbai

Ganesh Chaturthi transforms Mumbai into a spiritual haven for the entire city. The auspicious occasion spreads a festive atmosphere throughout Maharashtra. In practically every home in this state, Ganesh Chaturthi is celebrated. Ganpati festival is observed in other Indian states as well, although Maharashtra's celebration is by far the most raucous. Everyone enjoys this celebration because of its lively atmosphere, tasty modak, drum rhythms, and the holy Ganpati chanting (Ganpati Bappa - Morya). Mumbai introduces you to a variety of exquisite Ganpati idols that express both the craftsmen's creativity and the people's religious sentiments.
During Ganesh Chaturthi, Mumbai is at its most opulent. The best pandals and Lord Ganpati statues are made by a number of significant groups in this city.
An annual celebration commemorates Ganesha for 10 days starting on Ganesha Chaturthi, which typically falls in late August or early September. Clay Ganesha figurines are brought into the gathering as a sign of the god's entrance. On the festival's last day, Ananta Chaturdashi sees the idols (murtis) immersed in the nearest body of water. On the second, the third, fifth, or seventh day, immersion is a tradition in certain houses. Historically, the second, third, fifth, or seventh day of the year was reserved for private family celebrations of the Ganesha festival. Before Lokmanya Tilak transformed it into an important public event in 1893, the annual Ganesha festival was held as a private family celebration. He did this "to bridge the divide between the Brahmins and the non-Brahmins and develop an appropriate framework in order to build a new grassroots unity amongst them" in his nationalistic efforts against the British in Maharashtra.

Ganesha's tremendous appeal as "the deity for Everyman" led Tilak to select him as the centrepiece of the Indian struggle against British rule. Tilak was the first to install large public images of Ganesha in pavilions and started the tradition of submerging all public images on the tenth day. Hindus now fervently celebrate the Ganapati holiday all over India, even though Maharashtra is where it is most well-known. Additionally, the celebration grows significantly in Ashtavinayaka, Pune, and Mumbai.

The city that never sleeps will be filled with "Ganpati Bappa Morya" shouts for the next ten days as each Mandal puts on their best performance to honour Ganesha, the Elephant God, who is returning home. Larger-than-life idols and vivacious celebrations will be the result of months of labour by artists, sculptors, volunteers, and vendors. Some mandals will also advocate for a cause, adding to the joyous atmosphere that permeates the city during Ganeshotsav. Outside of the themes of ancient temples and opulent palaces, you will notice more eco-friendly clay idols and pandals that emphasise tree preservation, the work of the city's unsung heroes, and organ donation. This year, Baahubali, which dazzled moviegoers with its magnificent settings and visual effects, has also made an impact on a few pandals.

Check out the themes and decorations at 10 of the city's most well-known pandals if you intend to go pandal hopping.

Lalbaugcha Raja is one of the most popular pandals during the festival and is frequently the subject of 24-hour wait periods from devotees since he is thought to be a Ganpati who grants desires. According to the Mandal's president, Balaseheb Kamble, "our main objective is to guarantee that all devotees are able to get the darshan properly, which is why we have worked to ensure that water, food, and restrooms are easily accessible to them."Vendors of Peru Chawl had sworn in 1932 that if their stores were given back to them, they would erect a Ganpati pandal. The landlord gave them a permanent marketplace as a result of persistent efforts by local authorities and citizens; this is the current Lalbaug market.

In its 84th year of existence :
WHAT'S SPECIAL THIS YEAR: This year's pandal will have the theme of Gajraj Mahal, and the deity will resemble Korma, Lord Vishnu's second avatar.
LOCATION: Lalbaug market is located on GD Goenka Road in Lalbaug.
CLOSER STATIONS: Lower Parel on the Western line, Cotton Green on the Harbour line, and Currey Road/Chinchpokli on the Central line
The daytime is the best time to visit. 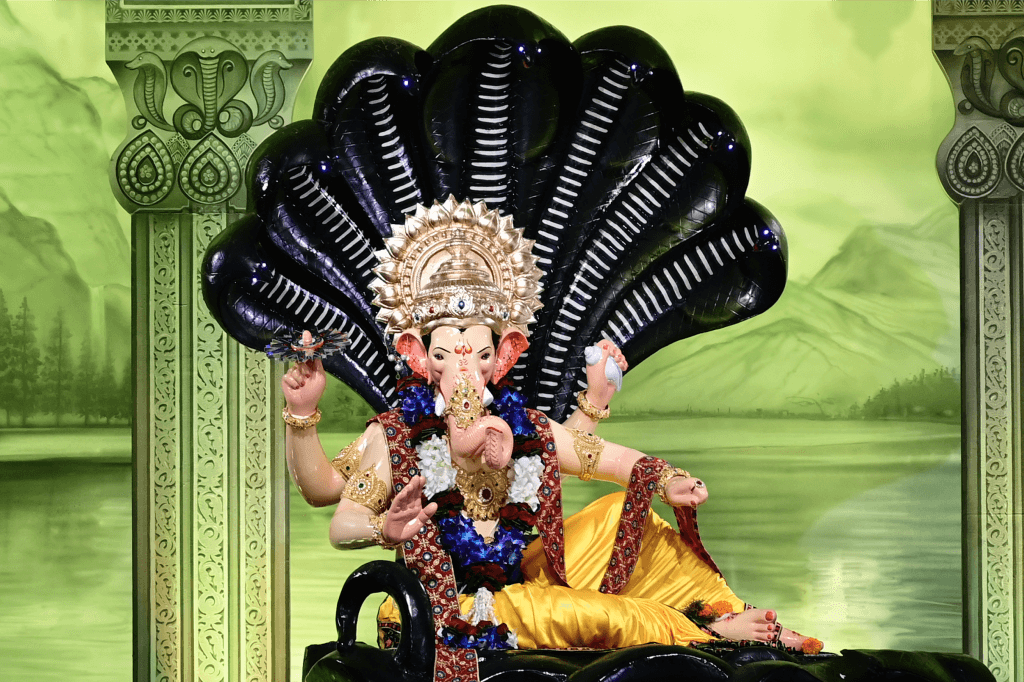 The countdown for the oldest mandal in Lalbaug's centennial festivities has begun. By paying homage to Dinanath Velling, the sculptor who made their idols in the festival's early years, they are accomplishing this. Vijay Khatu was mentored by Velling, who recently died away, and his daughter is carrying on the legacy. In the Khatu workshop, copies of Velling's masterpieces are still being produced. The pandal for this year will be an exact duplicate of Vellore's Sripuram Golden Temple. "We repeated our 1985 idol this year. The 5-kg gold necklace will be worn by the 22-foot-tall deity, according to Swapnil Parab, secretary of the Lalbaug Sarvajanik Utsav Mandal.

It is 90 years old :
WHAT'S SPECIAL THIS YEAR: The mandal aims to recognise those who quietly contribute to Mumbai's improvement. Every day, they will have a particular aarti, which will be performed by Sion Hospital nurses, bank staff, backstage performers, and railroad personnel.
LOCATION: Ganesh Galli, Lalbaug, India
NEAREST STATIONS: Lower Parel on the Western Line, Currey Road on the Central Line, and Sewri on the Harbor Line
The daytime is the best time to visit. 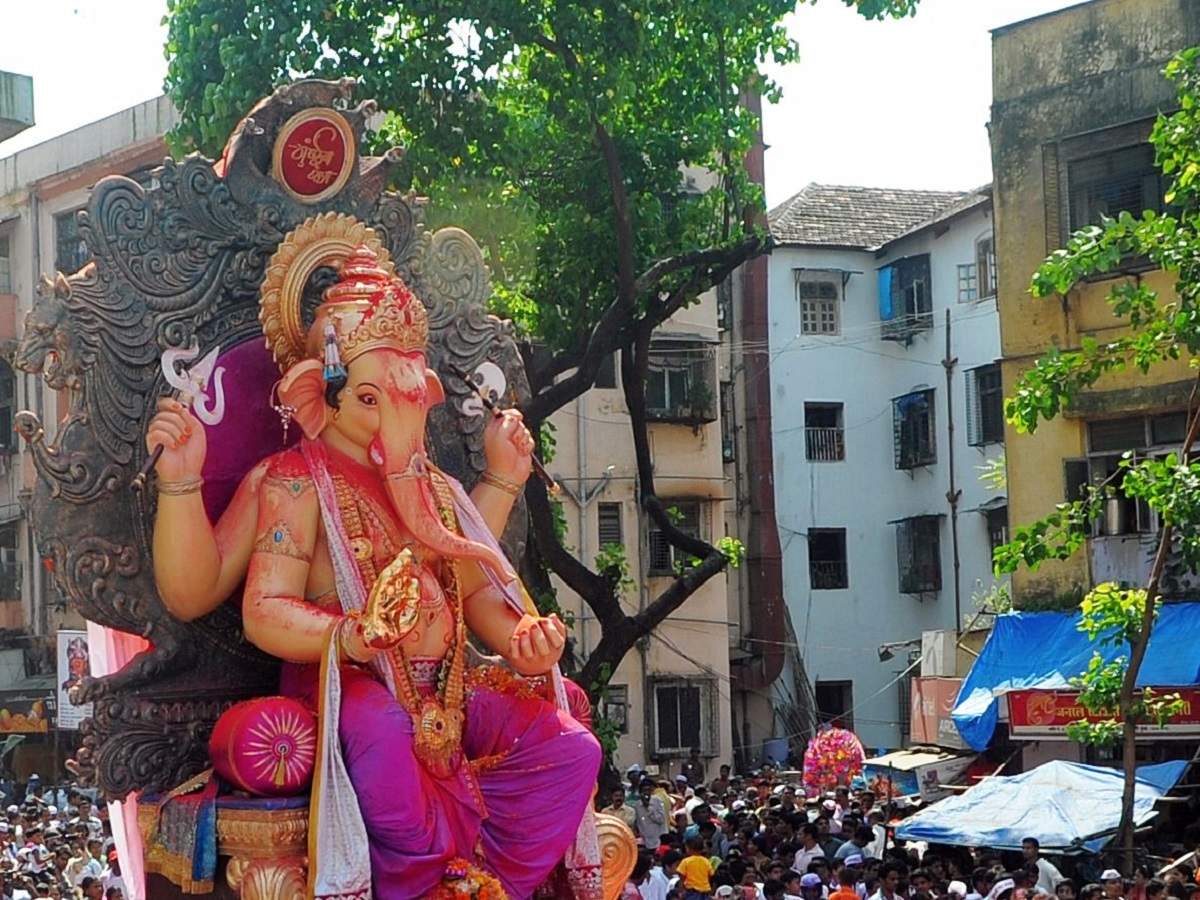 Lokmanya Tilak had resided in the city's oldest mandal. They have built an exact copy of Ratnagiri's Ganpatipule Temple to commemorate their 125th anniversary. Arundhati Bhattacharya, the chairman of the State Bank of India, will open the pandal on Friday.Vinod Satpute, a trustee, said, "Tilak has always been an inspiration for all of us, and we are delighted that we are continuing forward his legacy."

In celebration of the 125th anniversary of the event, the youth of the mandal have created 500 paper bags on which they have written a poem on the preservation of trees. The bag of plant seeds will be given as a gift to devotees.

Location: Girgaum's Keshavji Naik Chawl
The Western line's Charni Road station is the closest. The best time to visit is any time during the day. The 18-foot-tall Ganesh statue, known as Chinchpoklicha Chintamani, was created annually by the late Vijay Khatu. This year's pandal was designed to resemble Mahishmati Darbar from the popular fantasy film Baahubali. "This is Khatu's final idol creation. He had a hope that he would create a spectacular Ganpati for our 100th year, but he passed away before realising it, according to Sandeep Parab, a mandal spokesperson. Every year, the mandal allocates 60% of the funds raised to social service projects, such as supporting Adivasis and operating a library and nursery.In its 98th year, this Chinchpokli cha Chintamani idol was created by Vijay Khatu and is one of the first ones that his daughter Reshma Khatu has finished. 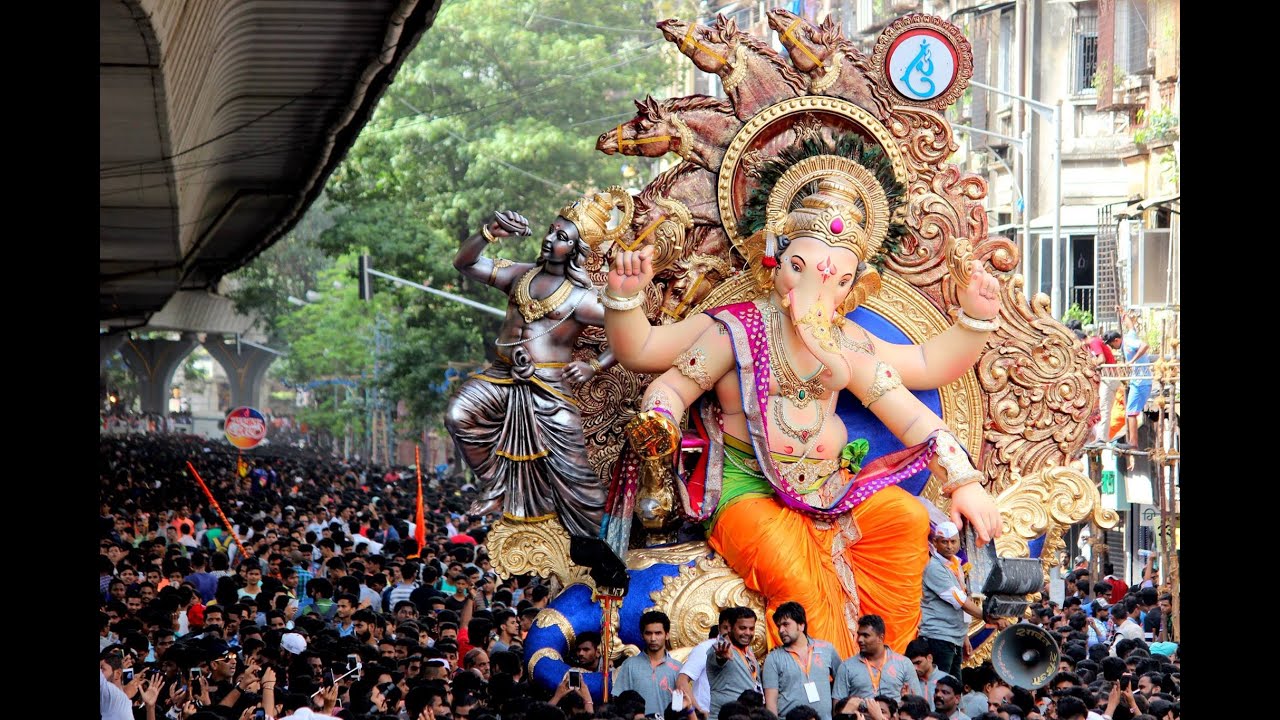 Celebrities frequent the pandals in the suburbs, like Andhericharaja. This year's theme is a copy of an Ashtavinayak temple created by Ananta Shinde and Dharmesh Shah. When they come to see us, the devotees will think that they have travelled from Pali, Raigad, to the Balleshwar temple, according to treasurer Subodh Chitnis.
The 3.1 kg crown that Andhericharaja's idol wears was made with gold gifts from 3,000 Mumbai residents in honour of the temple's 50th anniversary, and it is the same every year, being 52 years old.

WHAT'S DIFFERENT THIS YEAR: The mandal has reduced the amount of plaster of paris (PoP) used in their décor, taking a small step toward eco-friendly celebrations.
Veera Desai Road is the location.
NEAREST STATIONS: Andheri is the closest station.
BEST TIME TO VISIT: 5 AM TO 12 PM. Everyone will be at work during this time, so you can avoid crowds.
RULES: According to the organisers, attire above the knee is not permitted. 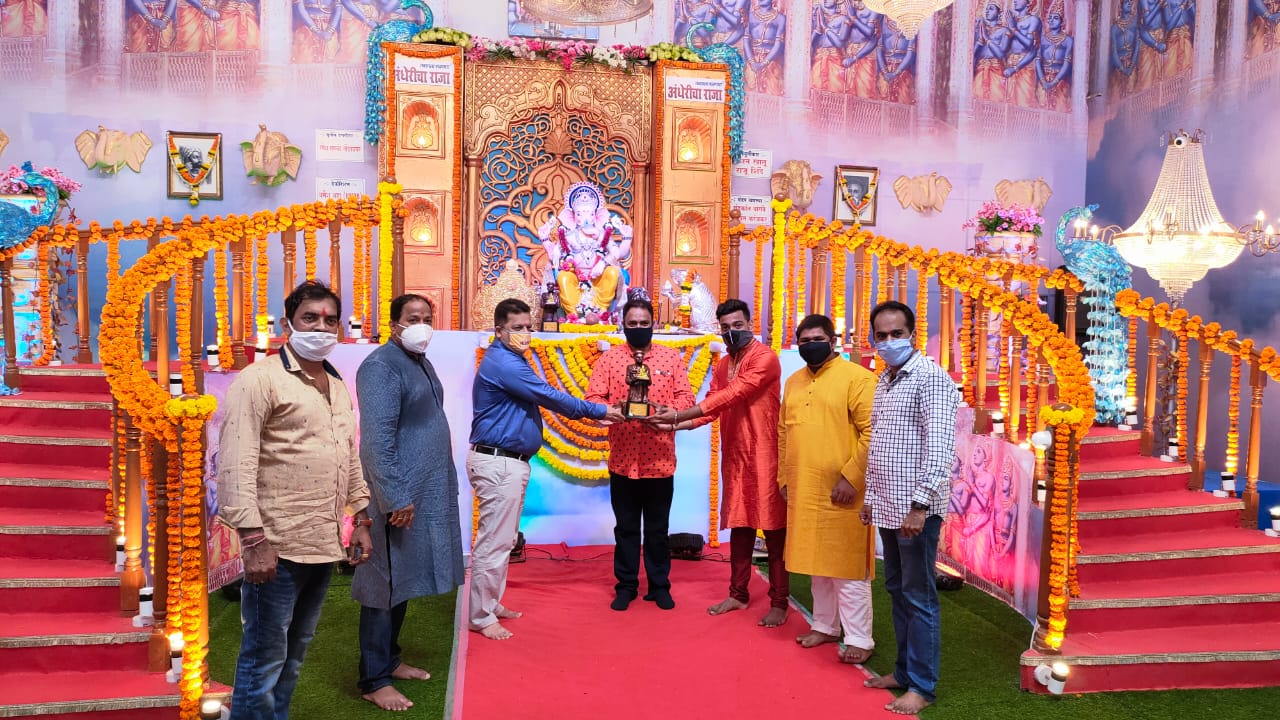 The GSB, King Circle is renowned for its gold Ganesha and has always supported events that are kind to the environment. The mandal is well-known for its traditional festivities and would execute poojas in accordance with religious customs by permitting devotees to engage in the religious rituals only when they wear certain clothing. This year, the mandal anticipates performing 75,000 poojas over the course of five days.

According to trustee Satish Nayak, "48 CCTV cameras will monitor the pandal around-the-clock."
In its 63rd year of existence:
WHAT MAKES THIS YEAR SPECIAL: The mandal will nonetheless have a silent procession for immersion even if the noise pollution guidelines have been reduced for most of the celebrations.
LOCATION: King's Circle, Matunga, GSB Sports Club Ground, close to SNDT Women's College
NEAREST STATIONS: King's Circle on the Harbour line, and Matunga on the Central and Western lines
BEST VISITING HOURS: 6 AM to 11 PM 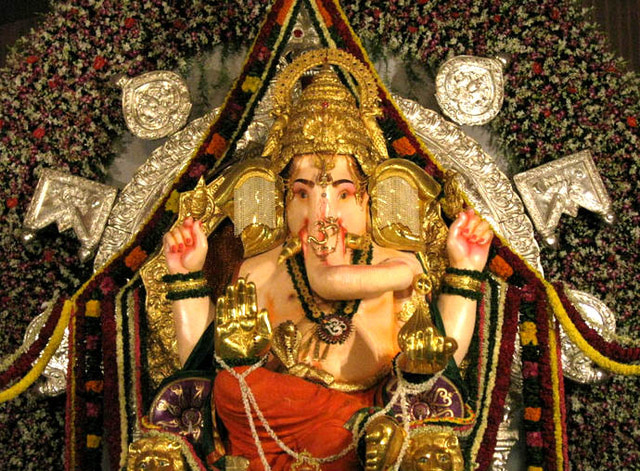 Fortcha Icchapurti is another pandal renowned for its lavish ornamentation; they typically create replicas of numerous palaces.
The worshippers will be treated to a reproduction of Bikaner Palace with marble effects, constructed by a team under the direction of art director Anant Savant, as opposed to last year's massive 40-foot elephant entrance.
The structures will be made of reusable fibre in an effort to further ensure that they do their part to protect the environment.

The secretary, Rupesh Surve, stated, "When it comes to security, we are very attentive, and we do not even let the vehicles of our volunteers be parked near the pandal."
In its 62nd year,
VENUE : close to CST
WHAT'S SPECIAL THIS YEAR: A group of eight Rajasthani painters created a marble-effect painting of the Bikaner Palace for Pandal.
NEAREST STATIONS: Churchgate on the Western line and CST on the Central line
Any time of day is the BEST TIME TO VISIT. 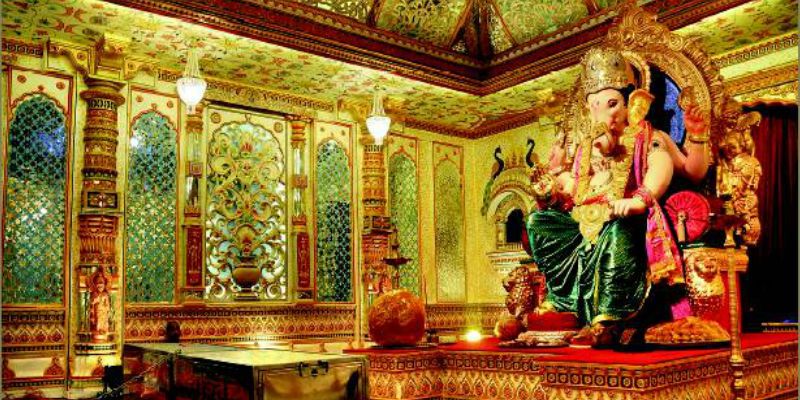 Sahyadri Krida Mandal, which is renowned for having distinct themes each year, is promoting "Jai Jawan, Jai Kisan, Jai Vigyan" this year. The magnificent decoration is mounted atop a structure that is 25 feet tall and 120 feet wide. In the past, they have made copies of the Varanasi Ghats, the Dakshineshwar Temple, and the Kung Fu Panda village as a tribute to 100 years of Bollywood. "Each year, we put a lot of thought into building our structures. As soon as one Ganpati is done, our president Rahul Walanj begins to consider the following one, according to vice president Jaya Shetty. 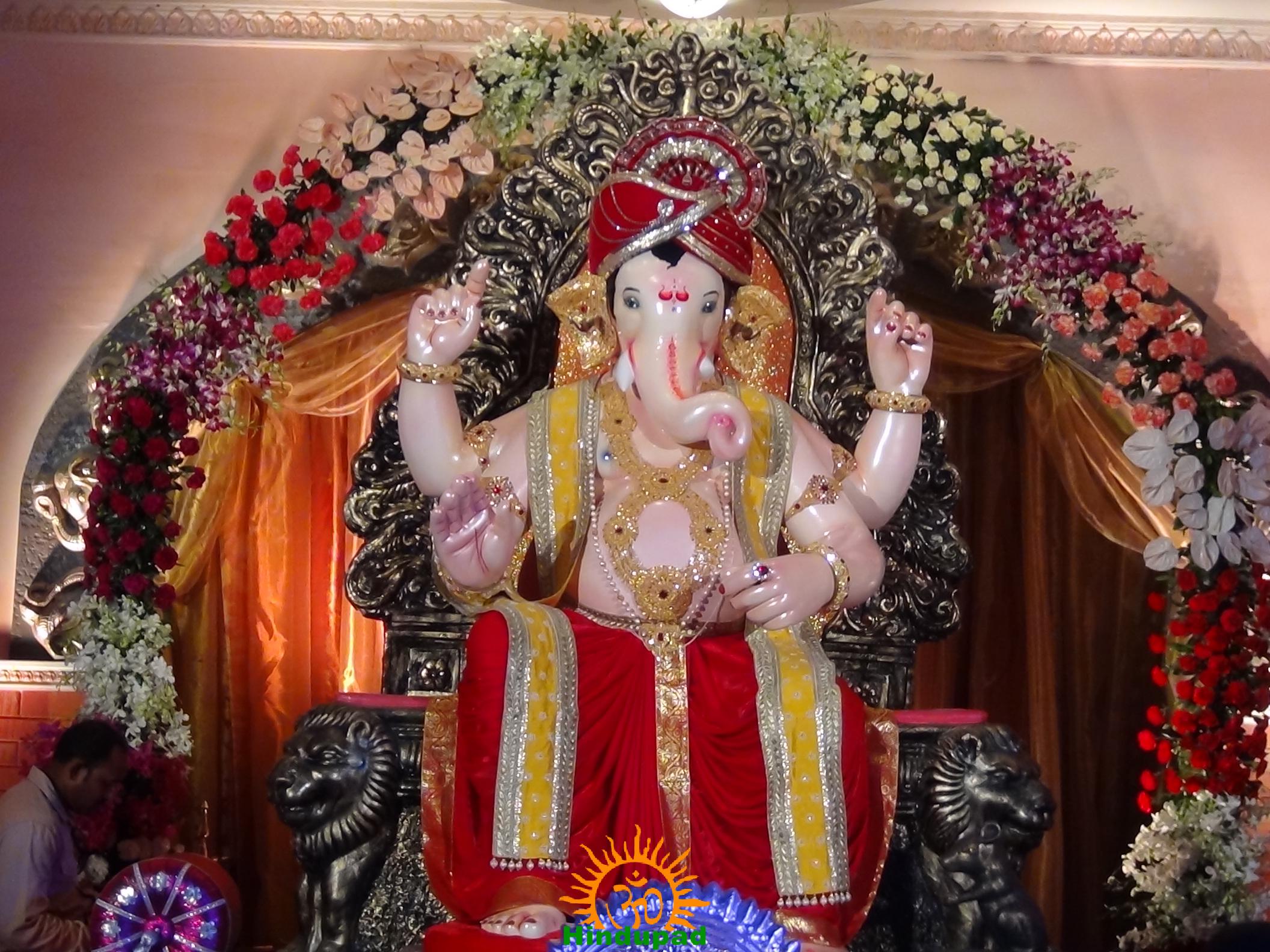 The pandal, also known as Khetwadicharaja, has won numerous prizes for best mandal and finest idol. Typically, diamonds are used to embellish this 15-foot high idol.
This year, diamonds have also been added to Ganpati's trunk to create a distinct look.
"Our goal is to make sure that every devotee has the opportunity to touch Bappa's feet, thus we kindly ask them not to move too quickly.
We would like it if people could relax and take in the atmosphere of a temple, according to Shankar Harale, the mandal's secretary.

WHAT'S SPECIAL THIS YEAR: Pandal created the set to look just like Baahubali.
LOCATION: Girgaum's 12th Lane Khetwadi
CLOSEST STATIONS: Charni Road on the Western line, Sandhurst Road on the Central line
The daytime is the best time to visit. 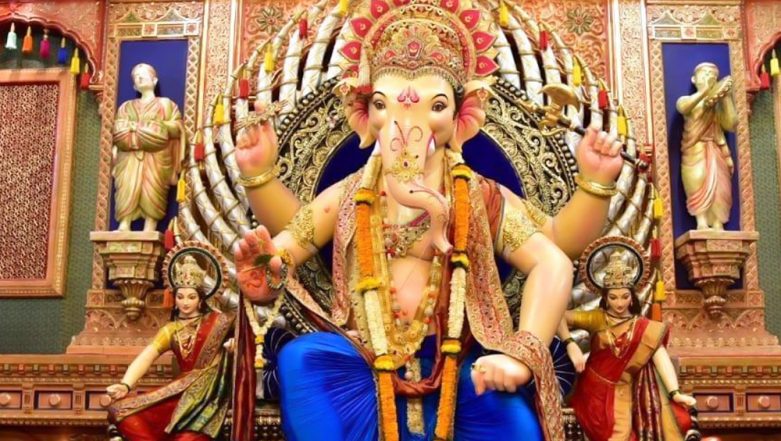 A 14-foot eco-friendly idol may be found in one of the wealthiest mandals in the city. The idol's hands, legs, and hips are all fashioned of gold and covered in diamonds. The Ram Mandir's mandal has chosen to decorate with flowers and a mukut (crown). Three devotees will present the idol with gold necklaces this year instead of the Rs 10 lakh gold garland they were given last year.
Every year, about 2 lakh people visit the pandal, and we want to ensure that prasad is given to each and every one of them after the darshan. The meal pandal can accommodate up to 1000 people at once, according to President Ulhas Kamat.
It is now in its 63rd year.

THIS YEAR'S SPECIALITY: This year, three devotees have added to the list of donors by giving the idol gold necklaces.
LOCATION: Dwarkanath Bhavan is located on Katrak Road in Wadala.
NEAREST STATIONS: Wadala on the Harbour Line
Whenever you like during the day.