Why did Lord Vishnu take the avatar of Krishna?

The idea of an avatar is one of Hinduism's most fundamental and crucial tenets. Hinduism's central tenet is that occasionally, when bad people triumph and good and pious people suffer, God descends to earth to take birth as a Human or in other forms. God defends the upright, slays the wicked, and reinstates dharma (righteousness). An avatar is a divine creature or person in this category.

Lord Vishnu is known as the "God who protects" in Hinduism. He is said to have used 10 of these avatars. They are Kalki, Matsya, Varaha, Koorma, Vamana, Narasimha, Rama, Parasurama, and Krishna. The two finest Vishnu Avatars in human form are regarded as Rama and Krishna. 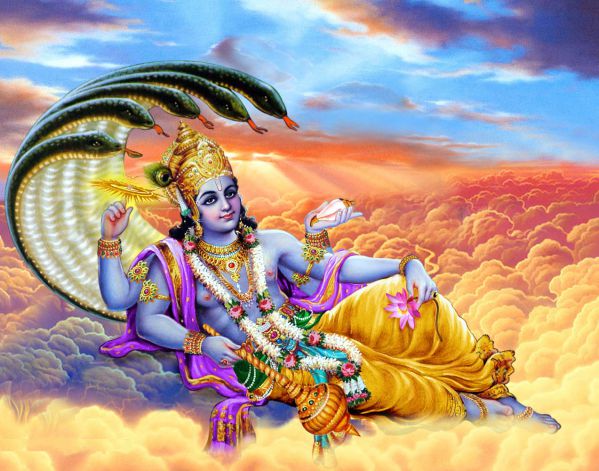 The Magnificence Of Krishna:

According to legend, Krishna's Avatar appeared during the Dwapara Yuga (a time period dating back to thousands of years). The intricate holy mythologies (Srimad Bhagavatam, Brahma Vaivarta Purana, and Mahabharata) found in Hindu literature reveal Lord Krishna's magnificent life story as well as the specifics of the heavenly performance He performed. There are numerous folktales and magnificent literary works that praise Lord Krishna's divine pastime, notably His captivating youthful tricks, and are practically available in all Indian languages.
The incarnation of Krishna is regarded as a "Poornavatar" – an avatar in which all of the attributes of God were discovered to be fully displayed. Throughout all of India, Vaishnavaises (devotees of Vishnu) may love, adore, and worship Lord Krishna more than any other Avatar. Given the attractiveness of the ISKCON movement (International Society of Krishna Consciousness), led by Swami Prabhupada, the worship of Krishna has even spread beyond the borders of India. He is the embodiment of love, just as Krishna is the embodiment of sweetness, thus it has happened. 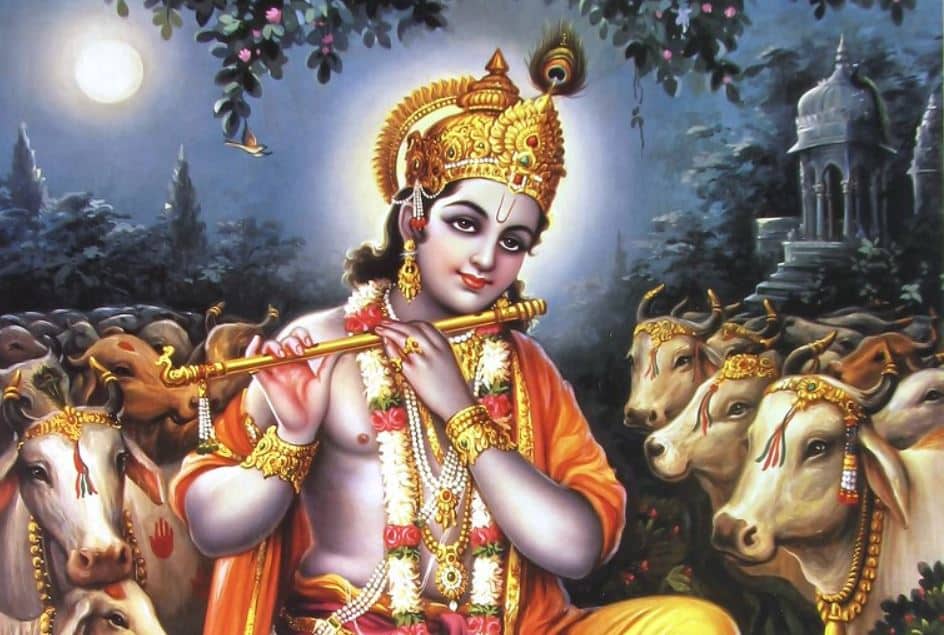 His magnetic pull on followers is undeniable. He is a preacher of Karma Yoga (the way of union with God via effort without attachment) and a beautiful example of a Karma Yogi himself. He works nonstop throughout his entire life with joyous detachment and abandonment, seeking no reward for himself. The Bhagavad Gita, one of the most revered Hindu scriptures, is a philosophical gem that is adored by people all over the world, transcending religious boundaries. It is with this practical authority that Krishna spoke to his apprentice and close friend Arjuna on the brink of a major Mahabharata war.

Krishna was completely aware of his divinity and never attempted to conceal it, in contrast to Rama, a highly respected Avatar from the preceding Yuga. Krishna displayed his celestial qualities and superhuman abilities at every proper and appropriate time. He used them to defeat his enemies, put an end to evildoers, and quickly assist his followers who were in need. He was simultaneously playing by the rules and ruling over them, and because of this lordship, he was also breaking the rules for the good of the world.

The birth of Krishna:

In the DwaparaYuga, the demon-like monarch Kamsa overthrew his father, the king Ugrasena, and took control of the Yadava clan's realm of Mathura. He grew too strong, and both celestial beings and humanity on earth suffered greatly under his oppressive rule. Lord Vishnu made the decision to take on human form in order to destroy the evil forces commanded by Kamsa after being moved by the sincere prayers of the suffering people. The issue of overpopulation at the time (which was made worse by increased proportions of the wicked and evil over the virtuous), and the suffering Mother Earth experienced as a result, was another reason for God's descent as an avatar. God manifested as Lord Krishna, and one of his functions was to start the mass extinction of the human species in order to create dharma and restore a reasonable balance to the planet's resources.

The eighth son, who would be born to his cousin Devaki, was predicted by the King Kamsa's astrologers to be the cause of his demise. Kamsa detained Devaki and her husband Vasudeva and imprisoned them in his prison in order to stop such an occurrence from occurring. Krishna was sneakily brought to Gokulam by his father Vasudeva as soon as he was born. It was a squall line night. Adhisesha, a heavenly serpent, was there to serve as a shield for the lord.

He would go to the jail as soon as the couple had a child and kill it there and then. Lord Krishna was the ninth child to be born. The newborn was mysteriously and covertly brought to Gokula, a community of cow herds belonging to the Yadava clan on the banks of the Yamuna River, at the time of the dramatic heavenly play, where he became the foster son of mother Yasoda and King Nanda. Maya, a female child born to them simultaneously, was taken back to the jail. Vasudev, Krishna's father, carried out the baby exchange at the direction of a divine order. These things happened without Devaki and Yasoda's awareness. When Kamsa learned that the eighth child had been born, he went to the prison as usual. However, as he lifted the child to kill it, Maya managed to escape and flew away laughing aloud, proving that the king had been duped and that the child intended to kill him was actually alive and well somewhere else. Kamsa experienced shock.

The Young Krishna Raised in Gokula:

At Gokula, the cow herds were Lord Krishna's playmates as he grew to be a happy adult. The most attractive and fascinating boy in the neighborhood, he had black skin. Anyone who came across him fell in love with him right away. There were plenty of tricks he learned as a kid. He enjoyed stealing butter from other cow herd lads and eating it with them. For all the young girls and women folk (Gopis) in the neighborhood, he became the prince charming. In the interim, Kamsa dispatched a number of strong demons wearing various guises to track down the child who had escaped from the prison and murder him. All of them (Putana, Sakatasura, Bakasura, Trinavarta, Vatsasura, Aghasura, etc.) were encountered by young Krishna, who killed them all as a game. 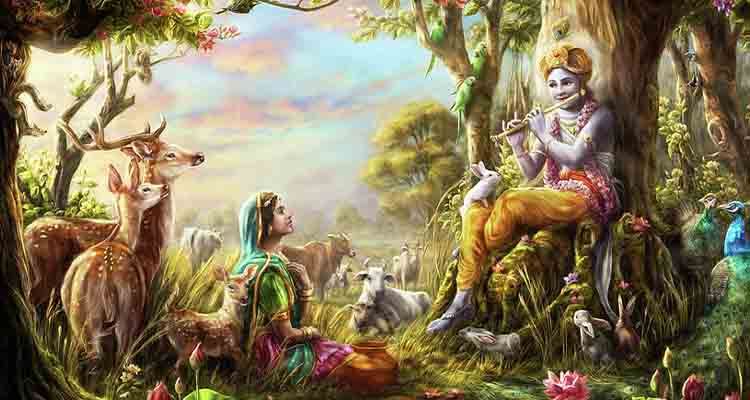 Additionally, young Krishna slayed Kaliya, a vicious and dangerous snake that lived in the Yamuna river. He pulled the snake out of the water and performed a dance at his hood that left everyone in awe. When the celestial lord Indra sent torrential downpours to Gokula as retaliation for Krishna forbidding a worship due to him, Krishna shielded the entire community by lifting the hill Govardhan and held it aloft like an umbrella with his little finger.

As Krishna grew older, the Yadava clan developed moral failings, became excessively haughty, and fell prey to vices. Krishna's lineage and his tribe received a curse from sages as a result of mischief, which opened the way for their oblivion. Families and the ruling class quarreled a lot, and they became out of control due to KriThe entire city of Dwaraka was subsequently inundated by the ensuing huge tsunami.

Krishna lived an extravagant life filled with divine play. The Vaishnavites continue to draw inspiration for the Bhakti movement from Krishna's early years spent at Gokula and Vrindavan, when he transformed into the very spirit of all the lives of Gopas and Gopis.

For sincere Hindus seeking direction and enlightenment, Krishna's Bhagavad Gita reigns as the ultimate reference work for all the many disciplines of yoga (Karma, Bhakti, Gnyana, and Raja Yoga).shna's divine and moral influence. They were soon going to be completely wiped out due to a verbal fight that occurred between two of Krishna's drunk cousins. The battle turned brutal, and Krishna assumed the role of the destroyer. He personally murdered numerous yadavas with pestles made of untamed grass. Krishna was aware that it was time to put an end to his divine performances in this Avatar. He retired to the wilderness, where he was deeply contemplating. Finally, he was killed by an arrow that a hunter mistook for a deer and shot at his foot.